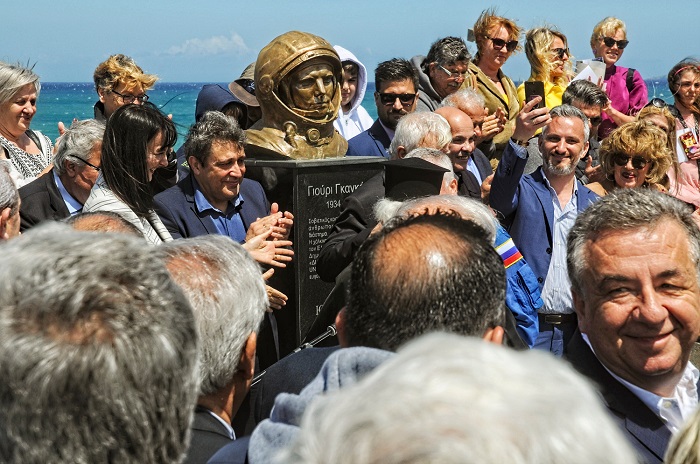 By Phil Butler
Greek Tourism Minister Elena Kountoura joined four famous Russian cosmonauts and Crete officials as she dedicated the new Yuri Gagarin Park in Heraklion on Sunday. This year marks the 85th anniversary of Gagarin’s birth.
The minister was joined by officials, businesspeople, and clergy as they celebrated Greek-Russian friendship and cooperation at the ceremony. Speeches, an olive tree planting ceremony and the unveiling of a bust of Gagarin all paid tribute to the legendary cosmonaut.
Minister Kountoura dedicated the new park, which is located at Karavola Fountain along the seaside of Heraklion, alongside Russian cosmonauts Anton Shkaplerov, Oleg Artemyev, Sergei Prokofiev and Theodoros Yurtsichin-Grammatikopoulos.
Also present, along with a crowd of roughly 2,000 local residents, were Crete Regional Governor Stavros Arnaoutaki and Heraklion Mayor Vassilis Labrinos.
The event, the brainchild of Mayor Labrinos, was organized in cooperation with the Municipality of Heraklion, Tez Tour Greece, and other organizations for the purpose of honoring Gagarin and fostering greater understanding and cooperation between Greece and Russia.
Kountoura’s opening of the park was followed by a blessing of the park by his Eminence, Archbishop Irenaios of Crete. Following the dedication, the blessing, and award presentations, the four cosmonauts planted olive trees next to the bust of Gagarin to signify peace and growing understanding.
The planting of the olive trees was suggested by Thanassis Avgerinos, who coordinates a rehabilitation program for Russian cosmonauts in Greece.
The trees were planted in front of special plaques with QR codes for each of the Russian space travelers, so that future generations of visitors to Yuri Gagarin Park may learn about the contributions they made to space exploration.
Colonel Yuri Gagarin, whose epic first flight into space was considered a possible suicide mission, paved the way for today’s human space exploration. Back in 1961, the brave Russian’s mission was given only a 5% chance of success, because at that time nobody knew for sure if humans could even survive in space.
Gagarin’s personal courage and fame would serve as a bridge between nations during the trying times at the peak of the Cold War. His famous comment as the boosters of his tiny Vostok 1 spacecraft fired at liftoff echo to this day. Gagarin’s only radio message to Russian mission control was “Поехали!”(Let’s go!).
Russian cosmonauts from more recent space missions have been taking part in a Crete-based program of post-flight rehabilitation and recovery since 2015. They arrive at the program after their long, grueling stints in the International Space Station (ISS).
The specialized program, first initiated by Thanassis Avgerinos, Roscomos, and key facilitators such as EyeWide Digital Marketing’s Minas Liapakis, has also been supported by the Greek Ministry of Tourism.
Phil Butler is Editor in Chief of the Argophilia Travel News

Hippocrates and Willow Bark? What You Know About the History of Aspirin is Probably Wrong