GRNews
GreekReporter.comGreeceLegendary Onassis Yacht Can Be Rented for a Mere $100,000 a Day 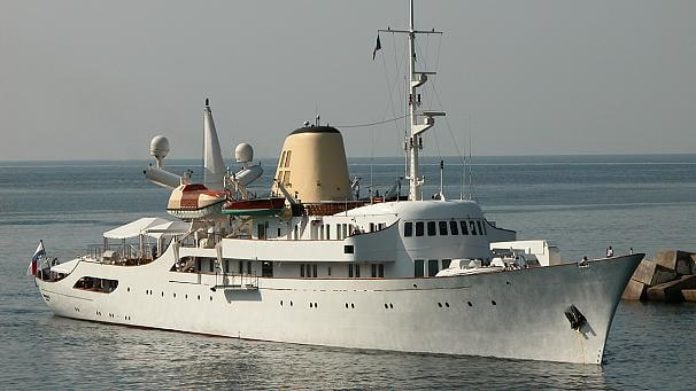 The 325-foot yacht “Christina O,” formerly owned by Greek shipping magnate Aristotle Onassis and former First Lady Jacqueline Kennedy Onassis, can be yours for a trifling $100,000 per day.
With new updates completed in 2015 and 2018, Valef Yachts is now chartering the ship for €90,000 ($100,000) per day for the upcoming peak summer months and €80,000($90,000) during the low season.
The yacht rental also comes with additional fees and deposits for food, fuel, and other amenities.
The yacht owes its fame to the great personalities and historic figures who sailed on the ship as guests of the Greek shipping magnate.


Winston Churchill, King Farouk of Egypt, Marilyn Monroe, Elizabeth Taylor and Richard Burton, John F. Kennedy, Frank Sinatra, Prince Rainier and Grace Kelly are some of the people who enjoyed the luxurious hospitality of the “Christina O.”
The old Canadian war frigate had been converted into a yacht by the Greek shipowner in 1954 at a cost of $4 million at the time; Onassis had initially bought it for just a few hundred thousand dollars.
It was originally christened “Christina,” after the shipping tycoon’s daughter; when Onassis died in 1975, he left the yacht to her, his only surviving child. Christina Onassis then donated it to the Greek state to be used as a presidential yacht. The storied ship was renamed “Argo” by the Greek government at the time, but sadly it was soon abandoned and was left to rust.
In 1998, Greek shipowner John Paul Papanicolaou, a friend of the Onassis family, bought it and renamed it, adding the “O” to the original name of the ship. Papanicolaou refurbished the boat from 1999 to 2001, spending over $50 million, according to reports at the time.
Since 2005, the “Christina O” has been available for charter at a cool €450,000 per week.
Papanicolaou’s heirs sold the legendary vessel when he passed away in 2010.