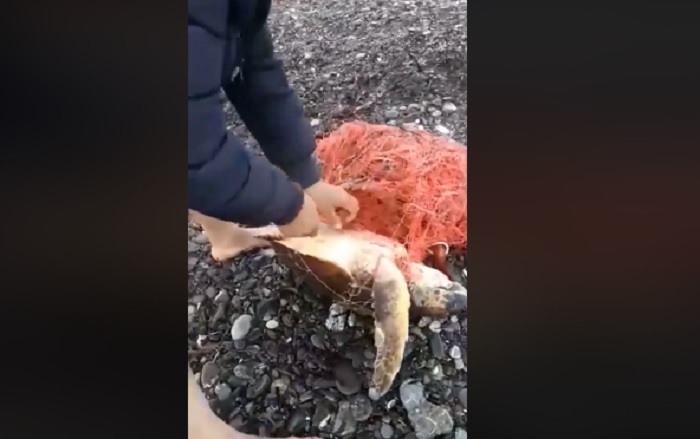 A sea turtle entangled in fish net and stranded at a beach in Crete was rescued by a passer-by earlier this month. The video of the agonizing rescue became viral.
The incident occurred at Lendas beach near Heraklion. A man is seen using a knife to carefully cut the net around the rare loggerhead turtle (also known as Caretta-caretta). After a few minutes the animal is free and is seen swimming away.


The single greatest threat to most sea turtles is fishing gear, the WWF warns. Hundreds of thousands of turtles are accidentally caught by gillnets, shrimp trawl nets and on longline hooks each year. Endangered loggerheads, green turtles and leatherbacks are especially vulnerable.
The loggerheads are the only marine turtles nesting in Greece and the Mediterranean.
They can be distinguished from other turtles by their large heads, reddish-brown shells and yellow/brown skin, while they are considered to be one of the oldest species in the world. An adult Loggerhead grows to a length of 1.0-1.2 m, weights between 100-350 kg and can live for around 65 years.
Greece is the most popular nesting site along the Mediterranean, with more than 3,000 nests per year.