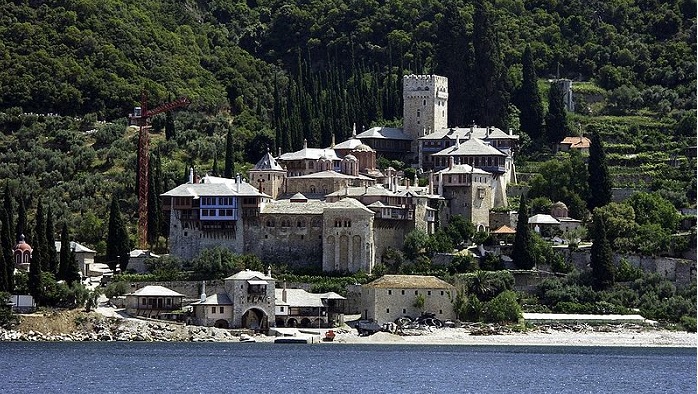 Mount Athos, referred to in Greek as the “Holy Mountain”, is one of the most important centers of the Christian Orthodox world.
Home to twenty monasteries under the direct jurisdiction of the Ecumenical Patriarch of Constantinople, it is governed as an autonomous state within the Greek Republic.
The first monks arrived on Mt. Athos in the ninth century. Today, over two thousand monks from Greece and many other countries, including Romania, Moldova, Georgia, Bulgaria, Serbia and Russia and the United States, live an ascetic life on Athos, isolated from the rest of the world.
The monasteries house priceless collections of well-preserved artifacts, including rare books, ancient documents, and artworks of immense historical value. Mount Athos has been listed as a UNESCO World Heritage site since 1988.
There is a prohibition on entry for women, called avaton (Άβατον) in Greek, to make living in celibacy easier for the men who have chosen to do so.
To some outsiders, the simple communal life of the monks may seem archaic. But for the  men who have chosen to live there, it is a peaceful, and even blissful, existence.
One man who chose this path in life is Father Neilos. He has been living in the monastic community of Agia Triada at the southern tip of Mount Athos for three decades.
“Mount Athos represents for each worshiper a sacred place of peace, solace, calmness and deep thought,” Father Neilos explains.
In his monastery, which is home to thirty-two monks, the days are spent in prayer, cultivation of the land and the creation of handmade products which they market to the outside world.
Mt. Athos welcomes male visitors who take part in annual retreats and tours. Fortunately, even those who are unable to visit the Holy Mountain can behold the beauty of the monasteries and their priceless treasures by way of video and photographs.
This unique and magical place, not far from the bustling city of Thessaloniki, is a bastion of unchanging peace and calm in a turbulent world.