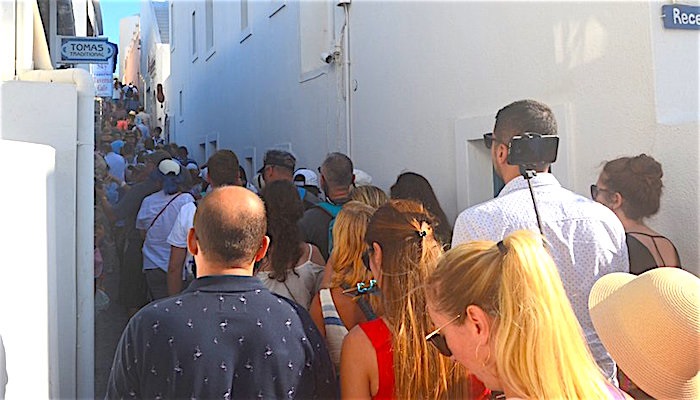 A scientific study presented to the European parliament recently warned of the serious dangers of overtourism on the idyllic Greek island of Santorini.
The report, presented at the Transport and Tourism Committee of the European Parliament, said that there were 5.5 million overnight stays on Santorini in 2017, compared to 3.3 million in 2012 — a staggering increase of 66 percent.
A total of 636 ships docked at the spectacularly beautiful island in 2015, carrying 790,000 passengers, which represents an increase of 7 percent over the previous year. This translates to more than 2,000 cruise visitors per day — peaking at 18,000 per day during the high season.
The popularity of the island may lead to an untenable situation, however, as the report says that the increasing volume of tourists may “negatively impact the future attractiveness of the destination.” 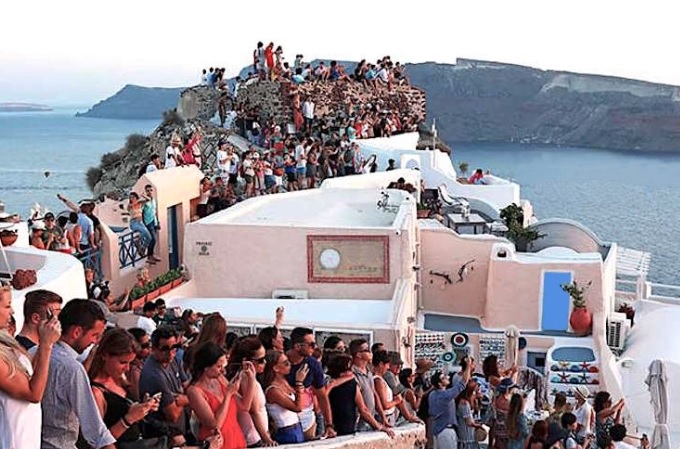 Report Highlights
Uncivilized behavior on Santorini is now seen as a “critical problem” according to the report. The negative impacts of overcrowding are concentrated in the summer season, from May to October, although some impacts have permanent consequences on the island and its community.
The overall congestion of the island represents a problem even for the tourists themselves. They experience problems related to traffic congestion, while the island itself must deal with increased issues of waste disposal and environmental degradation.
Local residents report that their most frequent issues are related to traffic jams, overcrowding, and congestion of facilities and infrastructures. They are also concerned about water and energy shortages.
The more serious and invidious issue of cultural displacement is on the horizon, as the tiny island becomes completely overwhelmed with travelers.
The proliferation of Airbnb short-term rentals is having serious economic consequences on island residents and seasonal workers. Airbnb is making it more lucrative to rent out properties nightly to tourists, instead of on a monthly basis to workers, who struggle to find affordable places to live.

Experts agree that Santorini is the most likely Greek destination to become literally overwhelmed with tourists. Among the main impacts of overtourism in Santorini are overexploitation, environmental impoverishment, and the volume of trash generated.
The current situation may well negatively impact the future attractiveness of Santorini to potential visitors.
There is so much pressure on what is now insufficient infrastructures that there is concern about the water and energy supply to the island. The environmental impacts of cruise tourism are another issue, as the giant cruise ships not only deposit thousand of passengers on the island all at once, but the ships also much discharge their wastes into the water.
Measures taken
Tourism development in Santorini up until now has lacked a strategic framework and effective planning. The destination suffered from inadequate support by the public sector in developing and implementing effective policies aimed at managing and regulating the influx of tourists.
The local community of Santorini is fully aware of the social, cultural, economic, and environmental impacts created by overtourism, and local authorities have begun to sound the alarm. But they are for the most part reliant on the central government, while they have limited power and resources. There is a lack of adequate and appropriate governance by the Greek government.
One of the few concrete measures that has been taken was placing a daily cap on cruise passengers, set at a maximum of 8,000 people per day. Their goals are to ensure a quality experience while preserving Santorini’s environment, by spreading out the number of cruise arrivals throughout the week. 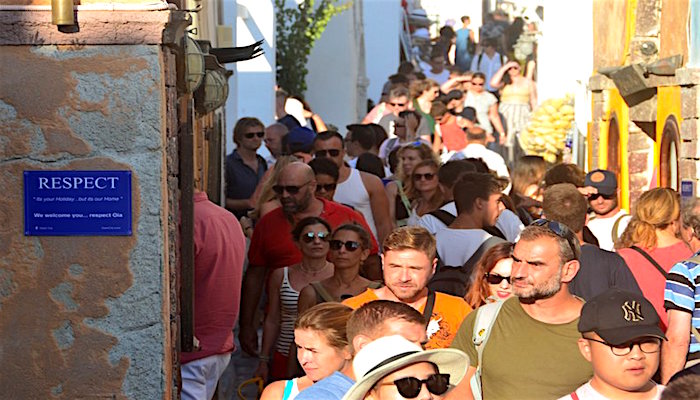 It seems that the measure has been effective in terms of limiting the number of one-day cruise visitors, since cruise arrivals have decreased for the last two years (The Greek Observer, 2018).
Immediate Action is Vital
The lack of foresight and strategic cooperation between local and national authorities could place the future of this magnificent island, with its whitewashed houses and azure-domed buildings, at risk.
Implementation of effective policies aimed at managing and regulating tourism is critically needed, in order to ease the negative consequences of overtourism on the local community.
The report concludes by saying that it is absolutely vital to work now to protect Santorini and prevent its deterioration — not to mention preserving the island for the enjoyment of tourists in the future.