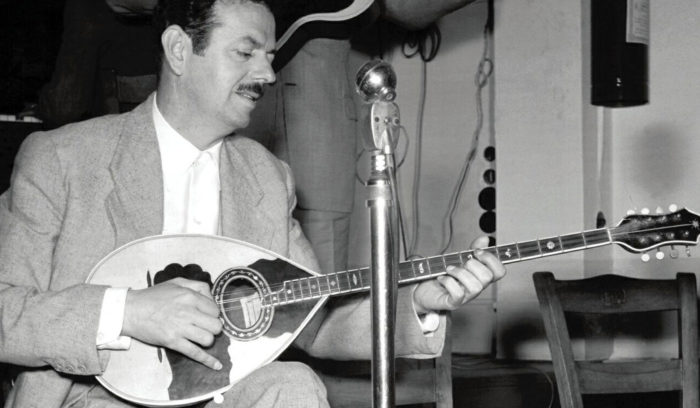 January 18, 2019 marks 104 years since the birth of the brilliant Greek musician Vassilis Tsitsanis, as well as 35 years since his passing.
Born in 1915 in Trikala, Thessaly, Tsitsanis was destined to become one of Greece’s most popular and creative musical legends.
Enraptured with music from his earliest years, Tsitsanis learned to play the violin, mandola and the mandolin. His brother Christos already played Greece’s most emblematic folk instrument, the bouzouki. Soon, the two brothers would be playing music together in their father’s coffee shop, which bore the family’s name, in Trikala.
Choosing a more practical path in his early twenties, Tsitsanis went to Athens in the early 1930’s to study law in the capital city’s university.
In order to earn some spending money, he played music in several tavernas, with ”Bizelia” taverna, in the poor neighborhood of Kolonos, becoming his first ”home” in the city.
There, he met the famous singer Dimitris Perdikopoulos, who providentially introduced him to representatives from Greece’s largest recording company, Columbia Records.
Tsitsanis made his first record for Columbia in 1937, featuring the song ”Arhontissa”, which became a huge hit nationally.


He also wrote ”This is Why I Wander,” ”For These Black Eyes” and many other songs which were sung by Stratos Pagioumtzis, Stellakis Perpiniadis and Markos Vamvakaris, who were all musical legends themselves.
In 1938 Tsitsanis was conscripted into the Greek Army. But almost every night, he would jump the wire fence of the army camp and go to play his beloved bouzouki in the tavernas he had frequented.
He also used his precious 48-hour-long Army furlough time to record for Columbia, showing his dedication and passion for his beloved Greek music.

Several years later, Tsitsanis moved to Greece’s second largest city, Thessaloniki.
There, during the country’s occupation by the Axis powers in WW II, he again began playing music in small tavernas. As soon as his new audiences heard him they recognized his great gifts, and Tsitsanis soon became famous across the city. He became so well-known that he was able to open his own ”ouzeri”.
Tsitsanis married in Thessaloniki and wrote scores of songs which would later become popular nationwide after the end of the occupation, when he was finally again able to record and release them.
”Ungrateful”, ”Bachtse Tsifliki”, ”The Circus”, ”Magical Nights”, ”Beggar of Love”, ”Derbederissa” and, of course, ”Cloudy Sunday” were only few of his songs which became immediate favorites of the Greek people.
Perhaps most importantly, by his gradual incorporation of oriental rhythms into his music, Tsitsanis almost singlehandedly made ”Rebetiko” music popular across the country.
Rebetiko was the ”underground” musical genre which came to the country’s mainland with the influx of Greeks from Asia Minor, following the great fire of Smyrna in 1922.
By introducing these new melodies and rhythms gradually, Tsitsanis managed to make ”laiko” (the people’s music) and ”rebetiko” widely appreciated and loved, not only amongst the lower social classes but by almost everyone in Greece.
The newly formed Greek middle class which was created due to the country’s rapid economic growth of the 1950’s and 1960’s showed increased appreciation for, and interest in, the ”laiko” and ”rebetiko” musical styles as they became softer-sounding and more polished.
Over the years, Tsitsanis’ songs combined more Eastern and Western musical elements together, incorporating unique traditions from the entirety of the nation, creating a distinctive and uniquely Greek musical genre.
Decades of adulation and fame were about to follow for Tsitsanis.

But tragically, in 1984, on his 69th birthday, Tsitsanis passed away at Brompton Hospital in London. The great musician had suffered complications following a lung operation which he had undergone several days before.
Only 24 days before that very day, he had performed at ”Harama”, the club he played in  for the last 14 years of his career, from 1970 until 1984.
Tsitsanis’ death marked the end of a unique era in Greek music, but his legacy within the Greek pantheon of music is unquestioned.
He was not only a virtuosic player, but a man who almost single-handedly created a new style of Greek music, bringing back to life ancient rhythms and melodies never to be forgotten.