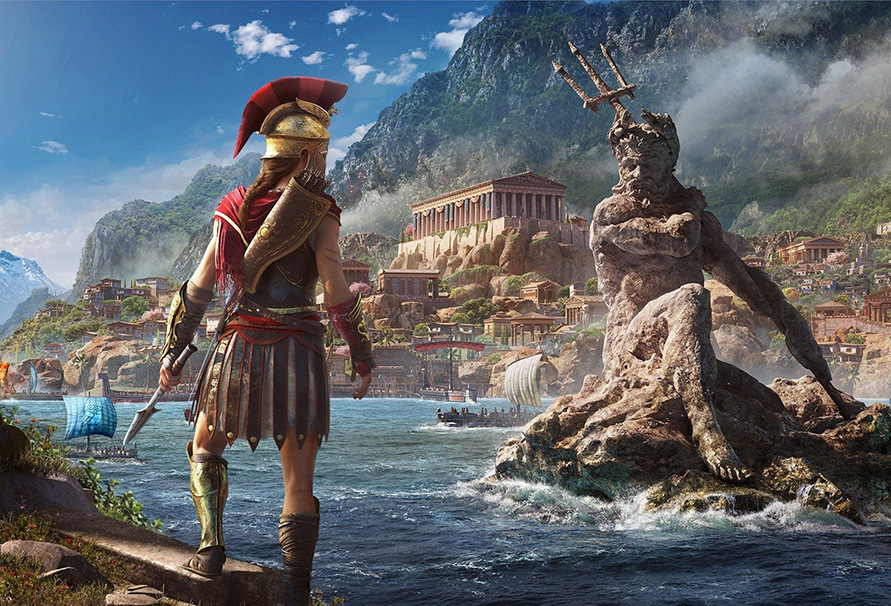 In the world of video gaming, using Ancient Greece for a backdrop is trending more than ever. But that shouldn’t be surprising, considering that ancient Greece has everything to offer as the ultimate setting — from beauty, magic and powerful gods, to the ruins (intact back in ancient times!), islands and culture.
Everyone recognizes that ancient Greece played a major role in western civilization, and everyone must be curious about what it would have been like to live there. Check out these 12 video games, and you may soon find out exactly what it might have been like to live in ancient Greece! Or as close as we could possibly imagine it to be.
1. Odyssey – Assassin’s Creed 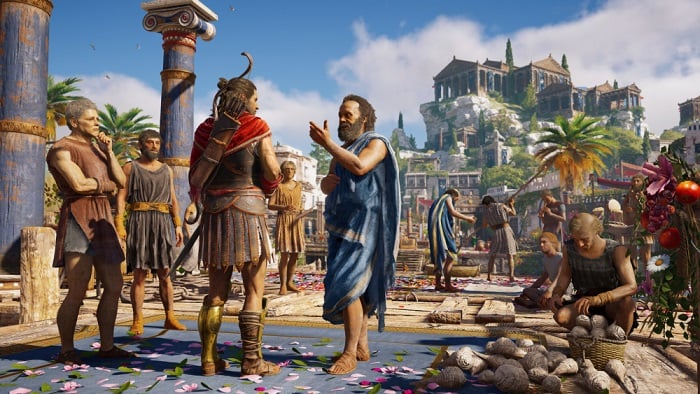 Throughout the Assassin’s Creed Odyssey, players deal with an array of political and scientific themes such as democracy vs. tyranny, myth vs. science and order vs. chaos. The game takes place in ancient Greece during the Peloponnesian War.
Ubisoft Quebec, the studio behind the popular Assassin’s Creed syndicate, truly went the extra mile to ensure the authenticity of ancient Greece in their new Odyssey game by depicting ancient Athens as a colorful, vibrant, multi-faceted city with many districts to explore.
2. God of War 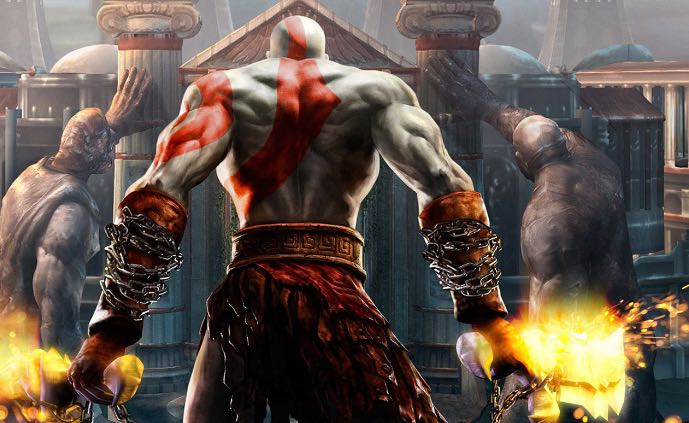 God of War is a bloody, battle-filled adventure and strategy game also set in ancient Greece. Developed by Santa Monica Studios, it revolves around Kratos, the protagonist, who encounters all of the most well-known Greek gods of Greek mythology. The graphics are quite detailed, as Kratos completes his “quests” while taking players through ancient landscapes.
3. 300: March to Glory 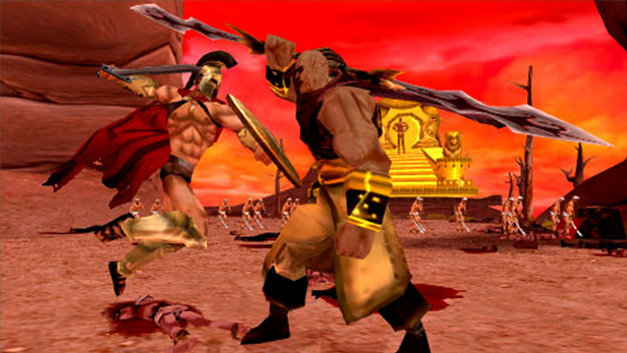 Most modern theatergoers know the recent movie “300”. Similarly, in the “300: March To Glory” game, the player is also Leonidas, the ruler of Sparta, before the time of the famous battle of Thermopylae.
Inspired by the movie and comic book which were very popular at the time of its creation, the game was developed by Collision Studios and published by Warner Bros. Games. “300: March to Glory” gives the player the chance to re-write history… and who wouldn’t want to be able to do that?
4. Age of Mythology 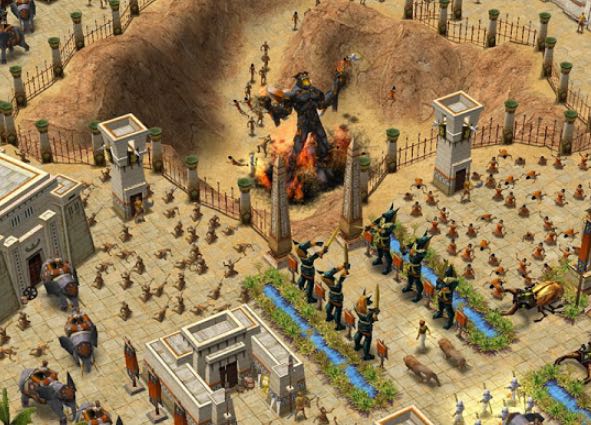 This game features heavy elements from Greek mythology, along with Egyptian and Norse mythology. It is a real-time strategy game, developed by Ensemble Studios, which later went on to develop the popular Age of Empire series. Here you will find all of the buildings and cityscapes of ancient Greece.
5. Wrath of the Gods 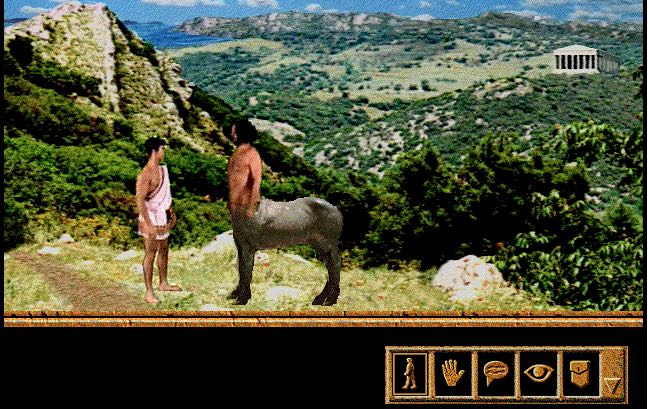 This adventure game is all about ancient Greece. The player’s background story alone is right out of Greek mythology! The player begins the adventure as a young royal child who has been abandoned in the high mountains of ancient Greece.
He and is soon found by a centaur by the name of Chiron, who raises the child. The player soon sets off to reclaim their Kingdom — no matter what it takes. The game was developed and published by Luminaria.
6. Zeus: Master Of Olympus 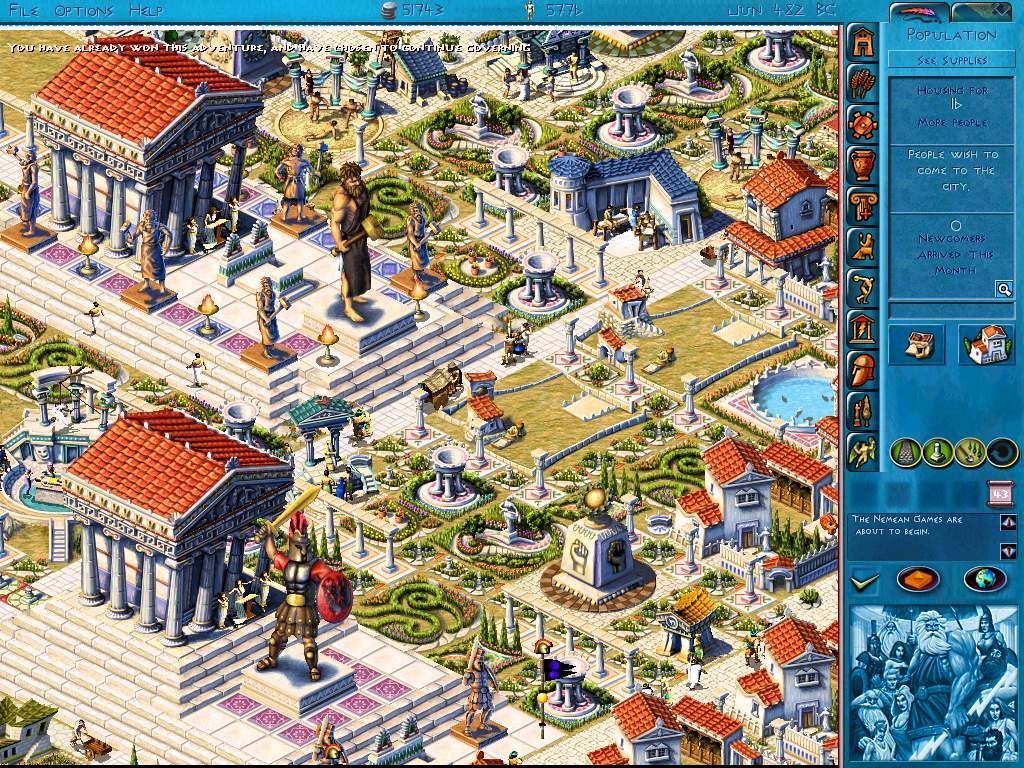 When it comes to city-building game series, this is one of the best which features Ancient Greece. You as the player are thrown into the ancient land during a time of great intrigue and adventure — where Greek gods, mythology and legends all played a crucial role in society.
The game has several options for players, including a story mode, missions mode, and a sandbox mode. This is the fifth stand-alone game in the series by Impressions Games’ City Building.
7. Okhlos 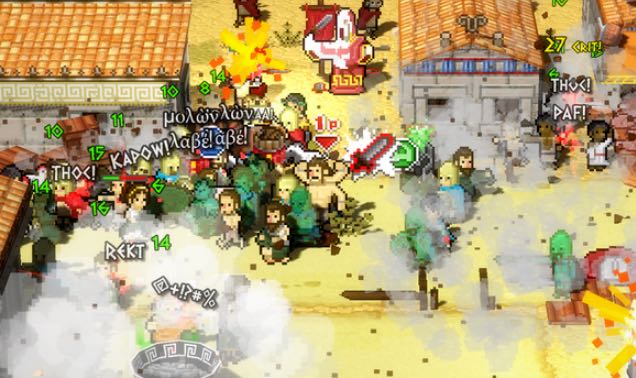 This game was developed by the Argentina-based studio Coffee Powered Machine and published by Devolver Digital. It is also based in ancient Greece and, of course, this means that the law of the land is that of the mythical Greek gods!
Okhlos is an action-packed game where the player is a scholar who doesn’t see eye-to-eye with the Greek gods, and sets out on a mission to destroy them.
8. Spartan: Total Warrior 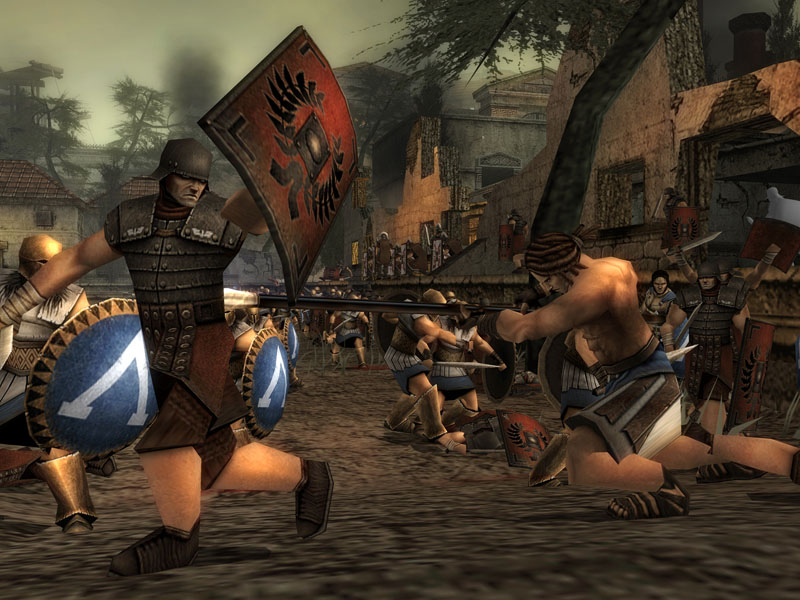 Brought to you by Creative Assembly, in this “hack-and-slash” video game you are a Spartan warrior who is under the tutelage of none other than Aris, the Greek god of war! This game is all about defending ancient Greece from the invading Roman empire.
9. Spartan Wars: Blood And Fire 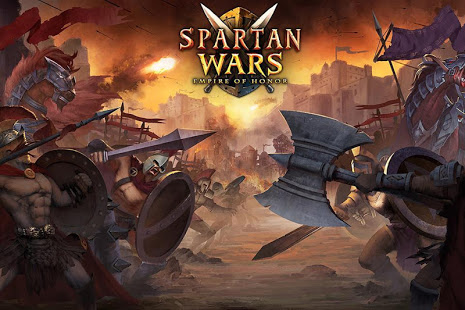 This strategy-based video game has 155,000 five-star reviews out of a total of 220,000 reviews! It is a real-time mobile/tablet game, using beautifully-rendered animation, which lets you build your own ancient Greek city.
It also allows you to assemble your own army to defend your land in the (unlikely!) event of “server vs. server wars”. The game is brought to you by developed by Tap4Fun Corp. Ltd.
10. Hegemony Gold: Wars Of Ancient Greece 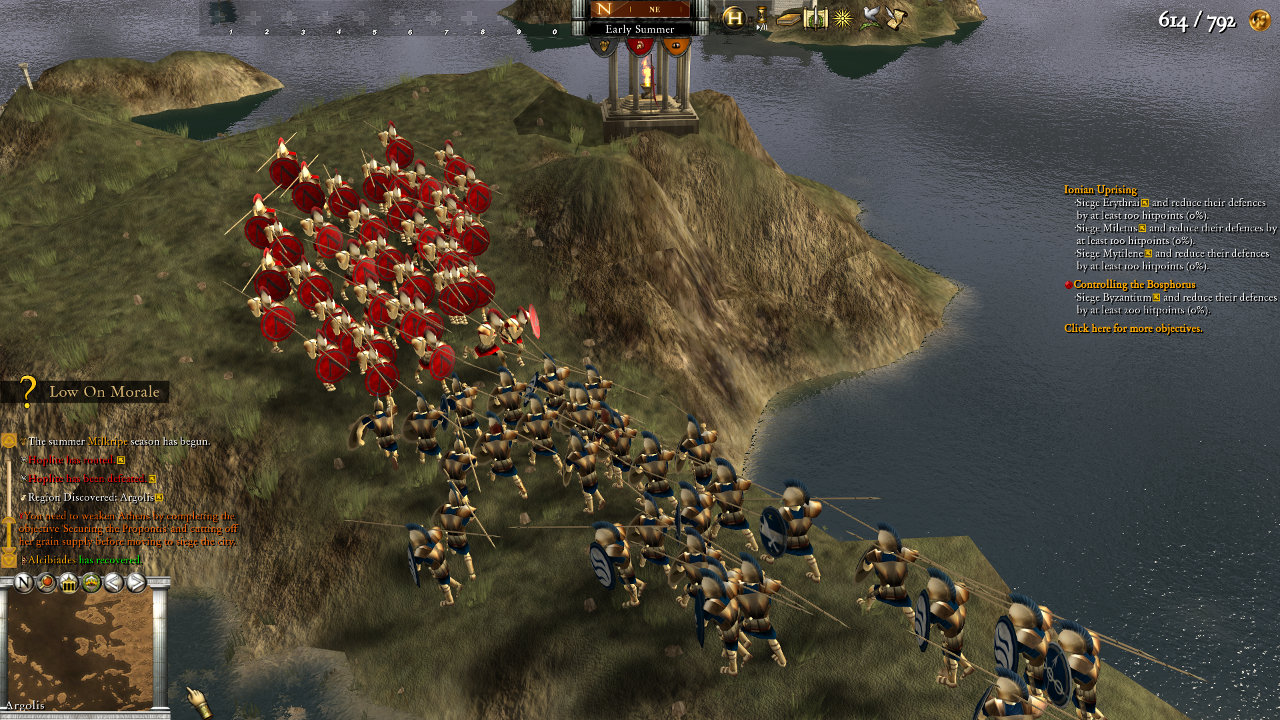 This real-time strategy video game is all about ancient Greece, and in particular, the military campaign of Phillip the Second of Macedon, the father of Alexander the Great. This game is all about battles and strategy, all of which you map out before the actual battle begins. It was developed and published by Longbow Digital Arts Inc.
11. NyxQuest: Kindred Spirits 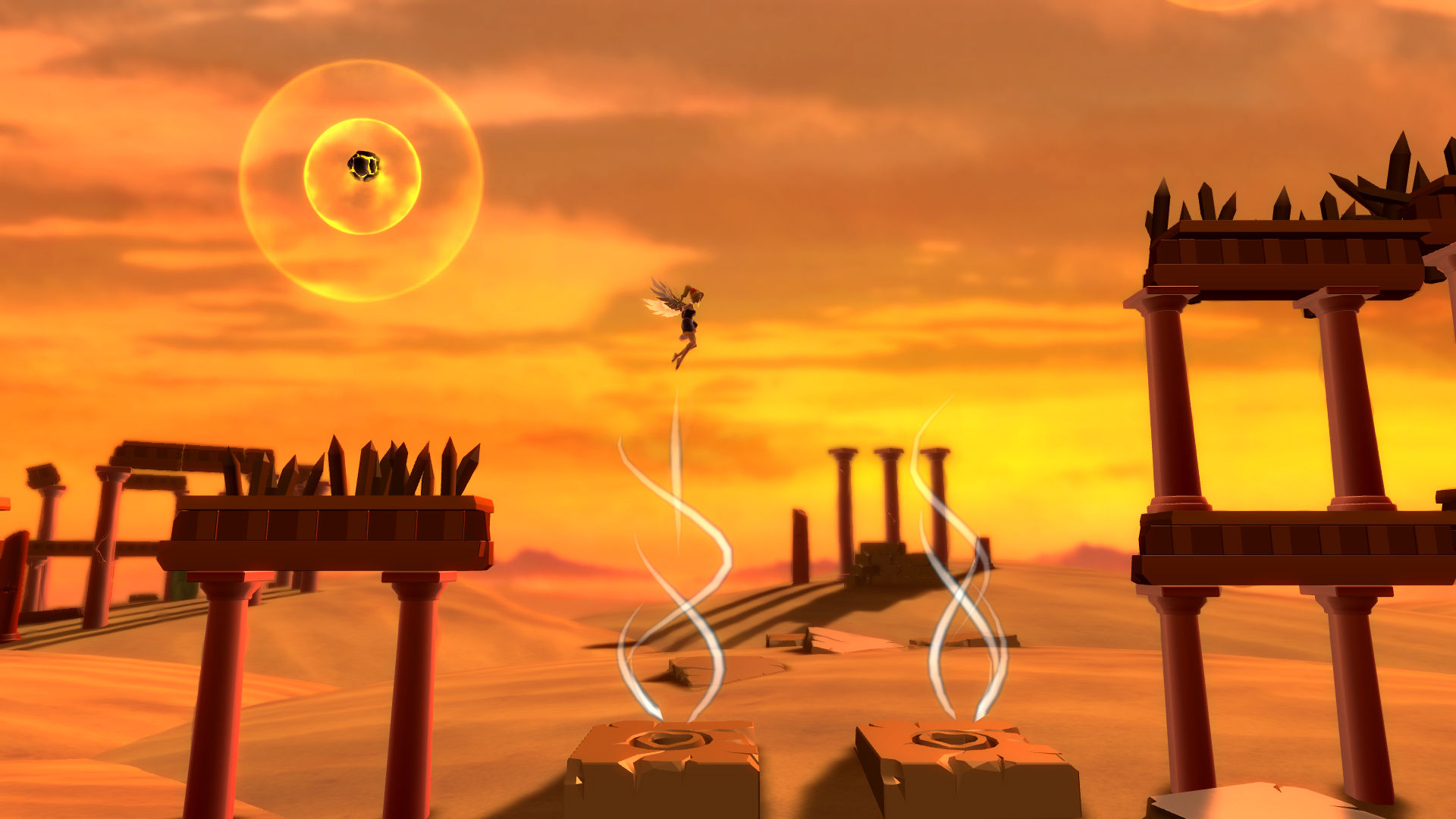 If all you want to do is see what it would be like to be a mythical Greek god, in this video game, developed by the Spanish developers Over The Top Games, you can do exactly that! You can play as two protagonists, known as Icarus and Nyx, who are given special powers by the Greek gods Zeus and Eolus, as they go on adventures and conquer the land.
12. 0 A.D. 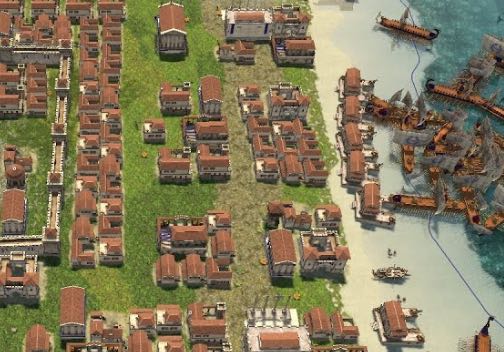 Developed by Wildfire games, this game is quite accurate when it comes to historical facts regarding Greek civilization from 500 B.C. to 1 B.C. There is even an updated scenario that focuses from 1 A.D. to 500 A.D. This is a free, open-source, real-time strategy video game which will take you through the best and worst of times in the history of Greek civilization!
Try out some of these fun and colorful games to “get your Greek on” and discover a bit of what it may have been like to live back in ancient Greece!