Ancient Greece: Growing up in Athens and Sparta

Despite the fact that they shared the same heritage and language, ancient Spartans and ancient Athenians were very different, and the two city-states were not on the friendliest of terms.
The Spartans were warriors, disciplined and strong, and always ready to die for their homeland. Hence the word “spartan” we use today, meaning someone who lives an austere life, indifferent to pleasures and luxuries.
Athenians, on the other hand, were educated and those who were not soldiers were philosophers, politicians, writers of tragedies and comedies, musicians, and sculptors.

Life in Sparta was one of simplicity and self-denial. Children were children of the state more than of their parents. They were raised to be soldiers, loyal to the state, strong and self-disciplined.
When a Spartan baby was born, soldiers came to the house and examined it carefully to determine its strength. They bathed the baby in wine rather than water, to see its reaction. If a baby was weak, the Spartans would throw it off a cliff (the Kaiadas) or take it away to become a slave (helot). The city-state decided the fate of children and nurses, who provided their primary care, did not coddle the babies.
A boy would be taken from his mother at the age of 7 and soldiers would put him in a dormitory with other boys to train them to become soldiers. A mother’s softening influence was considered detrimental to boys’ education. The boys went through harsh physical training and deprivation to make them strong. They marched without shoes and went without food. They learned the art of battle, to endure pain and survive through their wits. The older boys willingly participated in beating up the younger boys to make them tough.
Once they turned 20, young Spartan men had to pass a rigorous test to graduate and become full citizens. Only the soldiers gained the aristocratic citizenship. If they failed their tests they never became citizens but became perioeci, the middle class.
If the young men passed, they continued to live in the barracks and train as soldiers and were also required to marry to produce new young Spartans. The state gave them a piece of land which was farmed by slaves. The income supported them as full-time soldiers. At the age of 30, they were allowed to live with their families but continued to train until the age of 60 when they retired from military service.

Girls were also taken from their home at 7 and sent to school. Here they learned wrestling, gymnastics, and fighting. Spartans believed that strong mothers produced strong children. The women also had to pass the citizen tests at 18-20. If they did so successfully, they were assigned a husband. To prepare for the wedding night, their hair was cut short and they were dressed in male clothing. The man then returned to his all-male barracks. Men and women did not live together but met occasionally for procreation.
Since they were living alone most of the time, Spartan women enjoyed a much greater freedom and independence than women in other Greek city-states. They were allowed to walk around in the city and transact their own affairs.
In Athens, girls and boys were brought up differently. While boys went off to school at age 7, young girls continued to stay at home until they were married. Girls were not formally educated, but some mothers did teach their daughters to read and write. Others learned to dance or play an instrument, although a good family did not consider musical instruments to be proper for girls. A young girl was to assist her mother in the home. Also, if asked to help, she was required to work in the fields.
Instructing a young girl on her future role as a mother was very important. All girls learned domestic jobs such as weaving, working with textiles, taking care of children, embroidering, and cooking. Girls were able to attend festivals, funerals and sometimes visit neighbors.
Girls in ancient Athens were ready to marry after reaching puberty, at 12 or 13. Traditionally they would marry by 14 or 15 and then would live in their husband’s home. Once married, she would mostly live at home, only interacting with the household.
The boys of ancient Athens went to schools at 7. They did their work on waxed-covered tablets and a stylus. Subjects were similar to those taught today — they were taught math including fractions, addition, subtraction, division, and multiplication. They learned the words of Homer and how to read and write, and they had music instruction that usually included learning to play the lyre. Physical education and sports included the use of the bow and arrow and the sling, while competitions in wrestling and swimming were also included. The more wealthy learned to ride horses.
By age 14 boys were promoted to another school for their teenage years. By age 18, all boys were expected to attend military school from which they graduated at 20. From the age of 30 and on they could participate in politics. It was also around this age that they usually married. 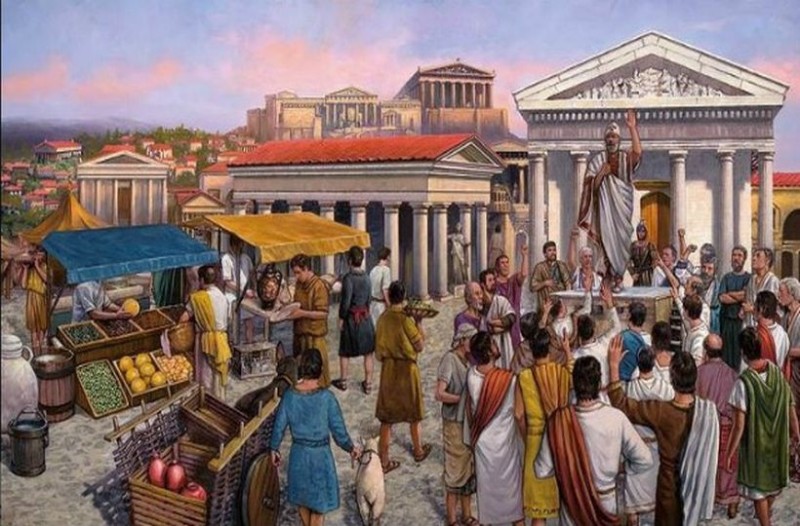 Men were the only people considered citizens, so they did the most around the town. Men went to the market, met with friends to discuss politics, and went to temples to worship. Men did all the shopping and doings outside of the house.
Athenian men had a special room in the house just for themselves. This room was for lounging around and entertaining male guests, no women except for slaves and entertainers were allowed inside the room.
Contrary to Spartan men, educated, well-to-do Athenians were very much interested in the arts, philosophy, and aesthetics. Architectural masterpieces like the Parthenon and the Erechtheion, or the statues of Praxiteles and Phidias, stand as proof that Athenian men were more cultivated than their Spartan counterparts.