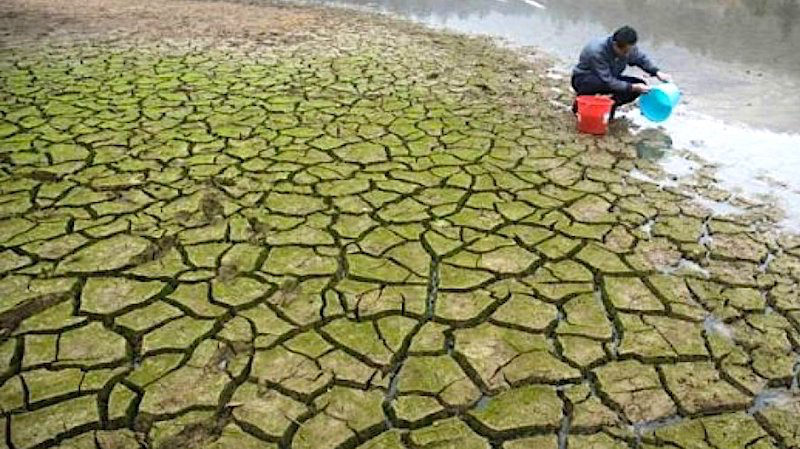 Greece is among the countries predicted to face increased water shortages before the end of the century, according to a study by the European Commission’s Joint Research Center (JRC).
Cyprus, Spain, Portugal, Italy, and Turkey will be facing similar problems as researchers foresee significant reductions in groundwater replenishment, particularly for Greece. An annual loss of 810 million cubic meters of water is estimated, translated to reduced availability of water for irrigation of agricultural crops and hence reduced the availability of food.
The future impact of climate change will bring changes in land use and water consumption habits. Scientists believe that on the one hand there will be increased floods, but on the other hand, water scarcity will worsen, especially during summertime. The consequences are mainly attributed to climate change (80 to 90 percent) and secondly to other factors, such as land and water use (10 to 20 percent).
The growing drought in the European South will lead to an increased shortage of water and reduced water supplies for hydroelectric plants in Mediterranean countries such as Greece. This will mean, in addition to agriculture and food, that the energy and transport sectors will be negatively affected as well.
For Greece – in the case of an increase in temperature by two degrees – an annual reduction of 2 percent is expected in the water supply of hydroelectric plants, while for northern Europe an increase of about 13 percent is expected. However, if the temperature increases by more than 2 degrees, by the end of the century the reduction in hydroelectric plants could reach 10 percent.
Greece and Cyprus are the two countries that will be affected the most by a two-degree rise in temperature. Water availability will be lower, with an increase of about 100 percent in the water demand to water availability ratio. The two Mediterranean countries will have the greatest imbalance in water supply and demand in Europe.
Scientists made estimates at a depth of 30 years, based on an optimistic scenario and a pessimistic scenario. The first is that the goal of the 2015 Paris Agreement for global warming of fewer than two degrees Celsius will be reached. The second scenario is that global warming will exceed two degrees Celsius and can even go up to four. Although in the most optimistic scenario the consequences are expected to be less severe, yet there will still be more floods and more water scarcity to come.
In the good case scenario, in Mediterranean countries including Greece, the number of people expected to be affected by water scarcity by the end of the century will rise from 85 million today to 104 million.
Central and northern European countries will have larger stocks of water each year, but also more floods than southern European countries.
(Source: Athens-Macedonian News Agency)