Meet Nomiki Konst: The Greek-American Seeking to Advocate on Behalf of New Yorkers 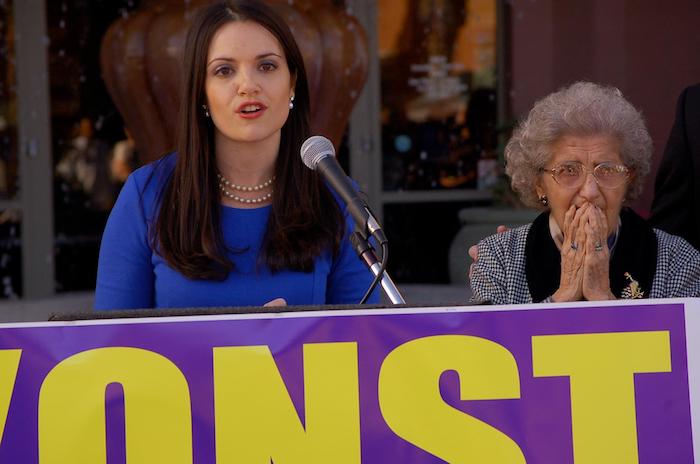 Nomiki Konst has always had a passion for politics; a passion which has come to fruition when she found her calling as a candidate for the office of New York City’s Public Advocate. However, as she explained to Greek Reporter, the way she discovered her path to her ‘ideal’ job, is not what you would expect.

A Greek-American and a democratic socialist, Nomiki has long been drawn to public service. At the young age of 16 she backed Hillary Clinton’s Senate campaign in New York. In 2012, Konst pursued the Democratic nomination in that year’s race for the House of Representatives seat for her home district in her native Arizona. She has also served as a national co-chair on Barack Obama’s presidential re-election campaign.

In addition, Konst has experience as an investigative reporter for The Young Turks, something that she feels will be an asset if she is to be elected as public advocate.

However, aside from Konst’s past political and journalistic experiences, it is her past which also motivates her to step into the public spotlight: the story of her grandfather’s migration to the United States; a tale of loss and hope.

Just last year, Konst lost both of her paternal grandparents within a few months of each other. “My yiayia was the ‘talker’ of the household,” said Konst, who explained to Greek Reporter, that until the death of her grandmother, her grandfather (pappou) remained reserved about certain things. However, in the short time that her grandfather survived his wife, he found his voice and told Konst the story of how he was forced to flee his village of Epirus in the dead of night, traversing the rocky, steep roads through the cold snow to save his own life.

Stemming from a village near the border with Albania, Konst’s grandfather had found himself being pressured by the Albanians to spy on the Greeks. As he explained in hist story to Konst, he, of course, said ‘no’, because he was Greek. Therefore, a ‘hit’ was placed on him, giving him no choice but to leave his village to save his life.

Konst heard this story for the first time as her grandfather emotionally recalled the details of his ordeal. As she listened, Konst felt like she had found a missing piece of the puzzle: that which explained what was drawing her to be an activist.

‘It comes from my pappou,” she proudly said.

Fast-forward to 2018 and perhaps it was “mira” (fate) or maybe just coincidence, but an opportunity that was “perfect” for Konst presented itself: the position of New York City’s Public Advocate would potentially be up for grabs.

Don’t be surprised if you aren’t sure what exactly what a Public Advocate does, as it is an elected position exclusive to New York City. This all-too-important position, which has been established to protect the interests of the people, tends to be overlooked.

Konst explained that although New York City’s public advocate has no voting power, she or he can attend meetings and introduce legislation and agendas and represent the interests of the people of New York City.

According to Konst, she is “running truly independent” and plans to bring her “own flavor” to the seat.

She was excited at the prospect of the position possibly becoming vacant and having the chance to perhaps run for office and be elected, but she didn’t want to get her hopes up.

Nevertheless, the story about her family’s trials and tribulations had enormous influence on Konst. While she already had a profound interest in running for the office of Public Advocate, it was a trip to Greece which played a major part in sealing the deal.

Konst had planned a potential trip to Greece at the end of the summer, but everyone else who was ‘onboard’ with traveling with her backed out at the last minute. Perhaps it was “mira” at work once again, but Konst decided to book her trip and travel to Greece on her own.

She had planned a trip to her papou’s village in Epirus. So, after a voyage through Greece, she arrived at the Greece-Albania border, greeted by an uncle whom she had never met. He took her to the village and as she sat in the car, even getting nauseous at times from the winding, steep, rocky roads, she couldn’t help but think of her papou traversing the same land in the dark, cold dead of night just to stay alive so many years before.

“That trek [he made] brought us life,” she said, reflecting on her grandfather’s bravery, which resulted in preserving future generations of the family.

The trip to Greece made this Greek-American young woman feel even more proud of her roots. Konst explained that it “motivated [her] even more” realizing first-hand the struggles that her family endured to ultimately arrive in ‘the land of the free and home of the brave’.

For Konst, the best part about being a Public Advocate is that the position is not one that is politically motivated.

“It’s a watchdog position, [and] the City of New York needs to step in for everyone,” she said.

An advocate of “Medicare for All” and free college education, Konst plans to fight to represent all the people of New York City. She splans to fight for a living minimum wage, increasing the current $15 per hour to $30 per hour.

As she explained to Greek Reporter, the current $15 per hour minimum wage is insufficient to survive New York City’s high cost of living. As a result, the average person is forced to struggle to survive in order to afford food, bills, childcare, and transportation, not to mention soaring real estate prices.

“We have a real estate crisis in New York City,” she said. “The rising cost of living and taxes…it’s so outrageous. We have to think realistically.”

When asked how she will be able to keep special interest groups from influencing her campaign platform and her actions if she is elected, Nomiki enthusiastically explained that “New York City has a system of finance campaign regulations,” which encourage the political activity of all, regardless of income level. New York City has a matching funds program, making small-dollar donations go further and helping candidates rely on New York City residents instead of special interest groups.

It is truly special when, in the present day, we can slow down and remember our roots and where we come from; when we can pay respect to our elders, their struggles and their contributions. Konst is the first to admit that her family’s story is like that of so many other Greeks throughout the diaspora, as well as other Americans whose families migrated from different parts of the world seeking a better life in the United States.

“History is a reflection of culture,” Konst explained, adding that “[it is] giving me momentum. I am running because I feel very connected to the significance of this moment.”

Capital Link sponsored a webinar on Tuesday highlighting the importance of Greek culture and education amongst the Greek-American diaspora.
Business