PAOK Triumphs in Belarus while Olympiacos Succumbs in Milan (videos) 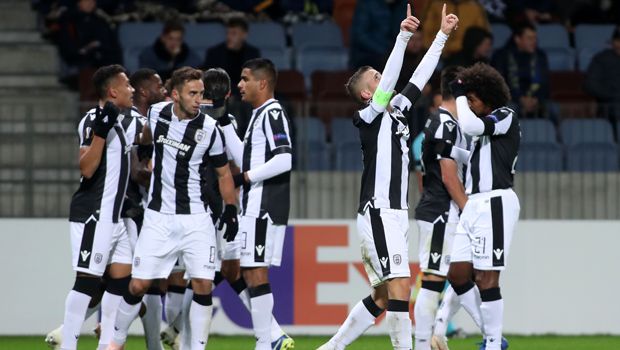 PAOK left Belarus triumphant after beating BATE Borisov 4-1, while Olympiacos lost an early lead to leave Milan defeated 1-3 in the second night of the Europa League Group Stage.
The Thessaloniki team started the game ideally, with Aleksandar Prijovic opening the score in the sixth minute and Leo Jaba scoring two more in the 11th and 17th minute. After that
everything was easy for the Greeks.
Substitute Maksim Skavysh scored a consolation goal for BATE in the 61st minute and the goal was just that. Through the end of the game there was not a single moment that PAOK players had to worry. Dimitris Pelkas made it 4-1 for PAOK on the 73rd minute to seal the triumph.
Two hours earlier, Olympiacos with 11 players who had not played in the Piraeus team in Sunday’s Greek championship game stunned AC Milan at San Siro stadium as they scored a magnificent goal with Angel Guerrero 14 minutes into the game.
On top of that, the Greek team seemed to stop quite easily all efforts by AC Milan strikers and midfielders. They even had a couple of good chances to score a second goal.
The Reds dominated in midfield until the 70th minute, not allowing AC Milan enter the box. However the introduction of Patrick Cutrone and Hakan Calhanoglu changed the match entirely.
Cutrone equalized for the hosts on the 70th minute and Calhanoglu found Gonzalo Higuain in the Reds box six minutes later and the experienced striker made it 2-1 for Milan. In the 79th minute Calhanoglu found Cutrone with a parallel pass and the striker sealed the victory for the Italians.
PAOK now has three points and up next they face two matches with Hungarian champions Vidi.
Olympiakos now has only one point after two games in the group. Up next the Piraeus team will face Dudelange of Luxembourg for two consecutive matches.