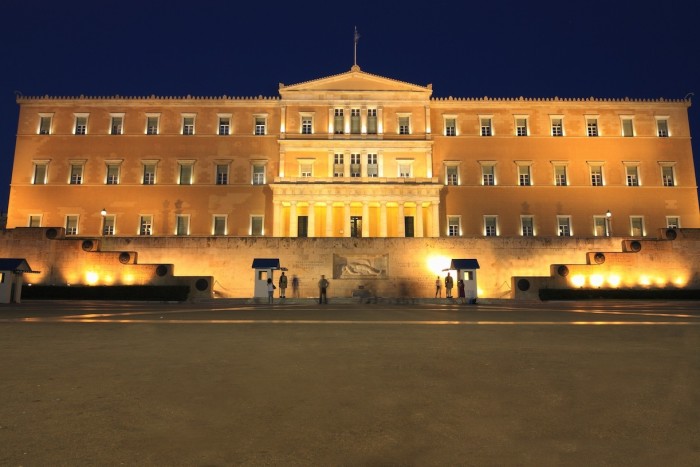 The draft budget for 2019 was tabled in the Greek Parliament on Monday in two versions: One without pension cuts and one with pension cuts.
The document will be uploaded on the House’s web page, and will be submitted to the Parliament’s Permanent Committee on Financial Affairs for processing.
According to the draft, the Greek economy is expected to grow by 2.5 percent in 2019 (up from a 2.4 percent provision of the medium-term program) and the GDP growth rate this year will be 2.1 percent (up 2.0 percent from the medium-term provisions).
The reason for the two different versions is because the Greek government is pushing for the abolition of the pension cuts measure, even though that has been agreed with creditors to apply as of January 1st.
The finance ministry argument is that since Greece will exceed the target of a 3.5 percent primary surplus in 2019, the measure is not necessary.
Specifically, the primary surplus is estimated at 3.56 percent of GDP for 2019 without the implementation of the pension cuts measure. If ultimately the pension cuts apply, the primary surplus is projected to be 4.14 percent of GDP.
Eurogroup chief: Pension cuts a fiscal measure, not a structural policy measure
On Monday’s meeting of euro zone finance ministers, Eurogroup head Mario Centeno said that pension cuts in Greece is a fiscal and not a structural measure and that the country’s budgetary situation is much better now than when the measure was agreed.
“Pensions are not a structural policy measure as the pension system has already been reformed. It is a fiscal measure. We all know the fiscal targets that have been set for this year and next and we all know that the situation is much better than it was 19 months ago, when this decision was made,” Centeno told reporters after the Eurogroup meeting in Luxemburg.
The Eurogroup chief added that it is important that Greece continues to stick to its commitments in order to meet fiscal targets and that in this framework there are two options being examined in the draft budget.