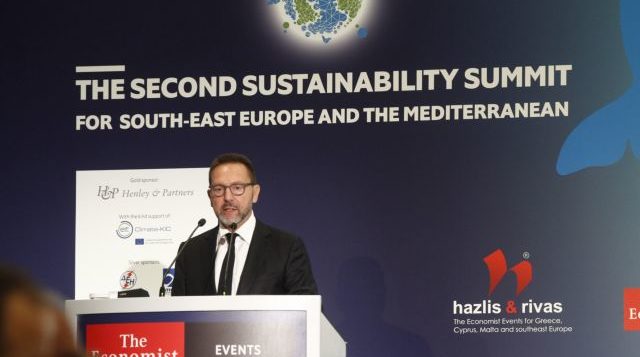 Climate change will cost the Greek economy €701 billion cumulatively by 2100, Bank of Greece governor Yiannis Stournaras said on Monday during a conference on sustainable development.
According to an analysis that quantifies and classifies the expected climatic risks for Greece, agriculture will be most affected, while the impact on tourism and coastal tourism systems will significantly affect household incomes and the economy as a whole. Of particular importance is the water supply sector, on which both agriculture and general water supply depend.
Stournaras said that Bank of Greece has been actively involved in research on climate change for the past ten years, with scientific documentation provided by the interdisciplinary Committee on Climate Change Impact Assessment (EMEKA). EMEKA is composed of environmental and energy economists, climatologists, physicists, biologists, engineers, and social scientists who are conducting studies evaluating the impact of climate change on the Greek economy, analyzing the economic, social and environmental consequences of climate change in Greece, as well as suggest ways for the Greek economy to adapt sustainable growth models.
In June, the Bank of Greece published the book The Economics of Climate Change, which is a comprehensive review of the latest developments in climate change economics.
EMEKA has highlighted the importance of a specific adaptation policy, which is necessary as a means of limiting the damage from climate change. For this reason, in the framework of a Memorandum of Understanding signed with the Ministry of Environment and Energy and the Academy of Athens, EMEKA has designed the National Strategy for Climate Change Adaptation and is now planning its implementation.
Source: Athens – Macedonian News Agency