8 Years of Bailouts: A Timeline of the Greek Crisis 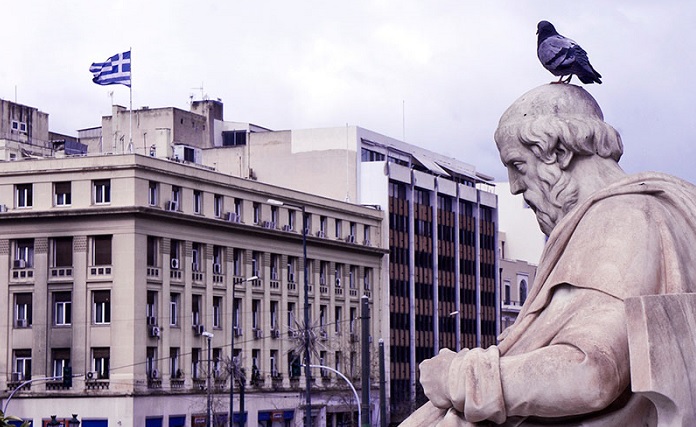 Greece turned a page on eight years of spending cuts and three straight international bailouts on Monday as experts warned that the country’s economic challenges are far from over.
The European Union, the European Central Bank and the International Monetary Fund loaned debt-wracked Greece a total of 289 billion euros ($330 billion) in three successive programmes in 2010, 2012 and 2015.
Greece suffered an economic hit comparable to the Great Depression in the U.S. in the 1930s. People became poorer, hundreds of thousands of businesses went bust, skilled workers emigrated, and extremist politicians made gains.
The Associated Press made a a timeline of the bailout years since the first rescue in 2009.
Oct. 18, 2009: Socialist Prime Minister George Papandreou’s government reveals that the budget deficit is double the previous government’s estimate, at over 12 percent of GDP, because of earlier undisclosed debt. The shortfall eventually reaches 15.6 percent of GDP, more than five times the EU limit.
Dec. 8, 2009: Fitch downgrades Greece’s credit rating. It’s the first in a series of downgrades by all ratings agencies that will bring Greece into junk status.
April 23, 2010: From the tiny Aegean island of Kastellorizo, Papandreou asks for a rescue package from Greece’s partners in the 19-country eurozone and the International Monetary Fund.

May 2, 2010: Eurozone countries agree to rescue Greece with 110 billion euros (currently $125 billion) in loans over three years.
May 5, 2010: In a day of mass protests and rioting against the bailout, three people die trapped in a burning bank in Athens.

June 29, 2011: Parliament passes a 28 billion-euro package of spending cuts and tax hikes in the face of two days of violent protests that see some 300 protesters and police injured.
Oct. 27, 2011: European leaders reach a deal with Greek bondholders that would see the private investors take a 50 percent cut in the face value of their bonds. The leaders also agree in principle to give Greece a new 130 billion-euro bailout package.
Oct. 31, 2011: Papandreou announces a referendum on the bailout program, shocking bailout creditors and markets. He cancels the plan three days later.
March 9, 2012: Greece carries out the biggest debt restructuring in history, writing off 105 billion euros owed to private creditors.
April 10, 2014: Greece returns to bond markets for first time in ten years, selling a five-year bond.
Jan. 25, 2015: Leftwing party Syriza wins general election, pledging to tear up bailout-linked austerity deals. Relations with creditors quickly deteriorate.

June 28, 2015: Amid concern that Greece will fall out of the euro, the government limits money flows and bank withdrawals to avoid financial collapse.

July 13, 2015: Greece signs up to a third bailout program, worth 86 billion euros over the next three years.
June 22, 2018: Eurozone countries agree on terms to ease Greece’s debt repayment schedule, and approve the last details of a plan to end Greece’s bailout program on Aug. 20.