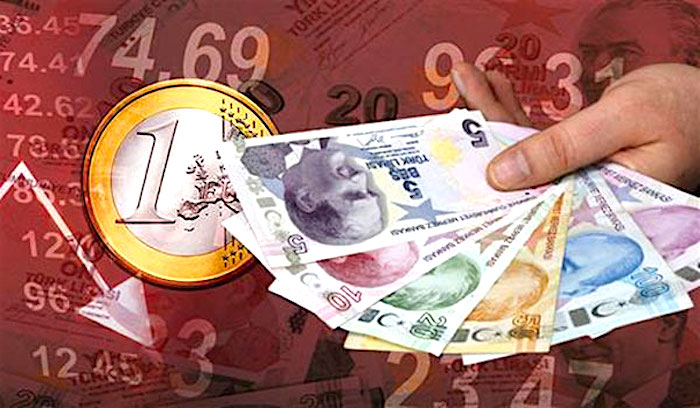 The Greek economy has started feeling the impact of the crisis in neighboring Turkey, as the Athens Stock Exchange showed a 3 percent plunge on Monday while Greek bond yields moved in the opposite direction.
As Greece is getting ready to exit the third bailout program on August 21, dark clouds loom over the Greek economy as the economic crisis in Turkey seems set to affect its neighbor in the long run.
Even though the Fitch rating agency upgraded Greece to “BB-” on Friday, international investors did not even blink — as though the upgrade never happened. It seems that investors will be very cautious over the next few weeks at least, to see what is causing the Turkish lira to take this plunge.
Ever since the U.S. – Turkey standoff, there has been very little buying in the Athens Stock Exchange. On Monday the General Index closed at -3 percent and at the lowest since November 2017, with bank stocks being the major negative players after being driven to losses of six percent.
At the moment, investors fear that the crisis in the Turkish banking system will be contagious, especially to emerging markets such as Greece. Thus, the Swiss bank has devalued European banks in an underweight position, and this affects the Greek banks, which have the lowest ratings from rating agencies.
Characteristically, Piraeus Bank lost 8.24 percent, Alpha Bank closed at -7.47 percent, National Bank at -6.43 percent and Eurobank at -4.77 percent.
In the bond market, the yield of the Greek 10-year bond rose to 4,294 percent, with an increase of 1,63 percent since Friday, being the highest since end June.
The five-year bond stood at 3,327 percent with an increase of 3.23 percent, also the highest since the end of June.
An even more direct danger to Greece is that Turkey is host to some 3.5 million Syrian refugees. If these people do not feel safe enough to go home, and if the Turkish economy no longer provides opportunities, a new wave of refugees toward the European Union could ensue. This would provoke a new crisis in Greece and the rest of Europe.
Greek companies in Turkey brace for crisis impact
Greek companies that operate in Turkey are bracing for the impact of the lira dive.
According to the latest report by the Greek Economic and Commercial Affairs Office in Ankara, the amount of Greek investment in Turkey has been significantly reduced after the National Bank of Greece sold Finansbank bank in 2015.  Specifically, the amount of Greek investments in Turkey currently stands at €150 million compared to €4.91 billion in 2015.
The most important Greek companies active in Turkey are:
TITAN cement
CHIPITA foods
GRECIAN MAGNESITE industrial mineral-refractory materials
PLASTICS OF CRETE Paints
ALUMIL aluminum and building materials
ISOMAT insulation materials
PALAPLAST plastic pipes
EURODRIP plastic irrigation pipes
KLEEMANN elevators                                                                                            KARELIA SA tobacco products                                                                            INTRAKOM, INTRALOT electronic gaming
GENECOR, EVDEMON business consultants
Currently, the Turkish 10-year bond trades at 21.2 percent, while short-term securities of one to three years, range from 20.5 to 25.6 percent.