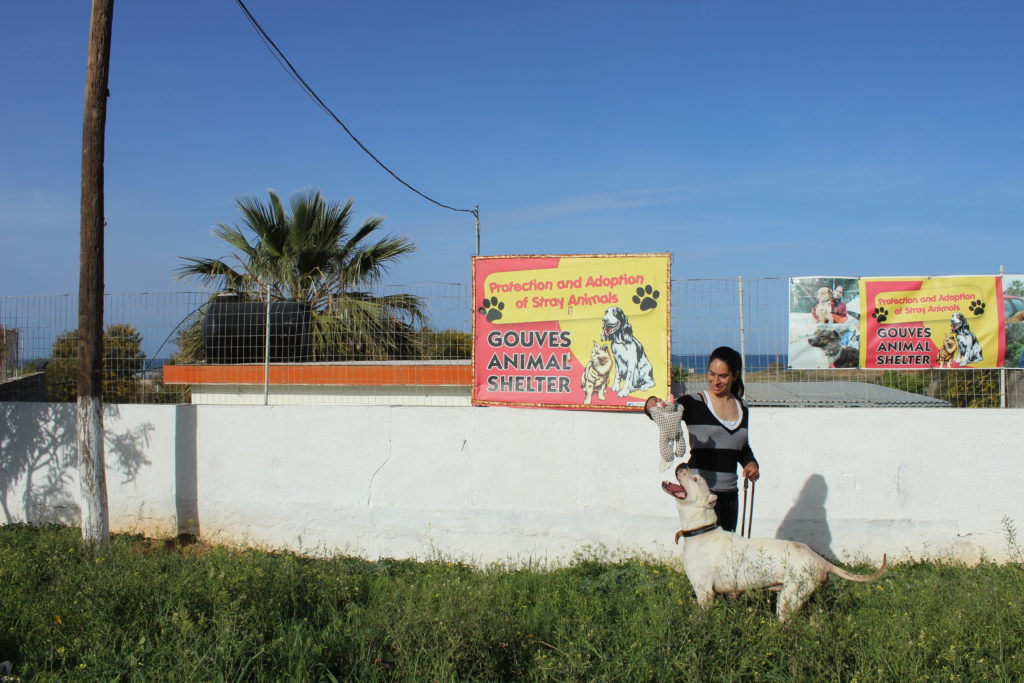 By Heini-Sofia Alavuo
Volunteering feels good and even the smallest acts count; everyone has their own reasons for wanting to help.
Mr. Manolis and Niki of Crete are just two examples of people who see volunteering as a way of life.
In Crete, a big problem is the amount of stray and unloved animals roaming the island. Local animal welfare organizations’ efforts, coupled with sterilization programs and education, are long-term solutions — and action is needed now.
Gouves Animal Shelter in Heraklion has been working for 10 years non-stop to help animals in need. They take care of all those that can’t survive on the streets and give them a second chance. Until this day every animal has been adopted, no matter how long it takes.
Manolis Spatharakis, more widely known as Mr. Manolis, founded the shelter in 2008. While he was living in Athens he was known for helping distressed birds, but after his return to Crete he began to shelter three dogs from the street — and that is how it all started.
The Cretan shelter is located in a former American military base in Gournes and for many years Mr. Manolis was running it alongside his day job at the airport. Once he retired in 2013 he continued to help full-time, funding everything with his pension.
When people ask why he maintains such hard work year after year, Mr. Manolis sighs slowly and gives a simple answer: because he loves life. He couldn’t turn his back on the stray problem in Crete.
In October 2017 the situation at the shelter changed drastically when Mr. Manolis had to go to hospital for surgery. He had been working more than his body could handle — after years of suffering, the operation was finally inevitable.
A change was also necessary — the shelter couldn’t rely on the strength of one man anymore.
Niki Manolaki is 30-year-old animal lover who stepped up when the situation was the hardest. Before Mr. Manolis’ surgery, Niki had been coming to the shelter once a week, whenever she had time.
Now she goes to the shelter almost daily, balancing the commitment with work and family. The shelter works persistently with other volunteers, trying to do what one man did almost alone for nearly a decade.

Labor of love
The work at the shelter is extremely hard both physically and mentally – it’s very noisy and during the summer working in the heat is challenging.
The shelter has approximately 200 dogs and some cats, all of which need to be taken care of daily.
Volunteers spend their time on feeding, giving water, cleaning, vaccinating, organizing adoptions and paperwork. They also update the shelter’s social media pages as well as  fundraising and trips to the vet.
The municipality’s help is rather minimal, and at the moment the shelter has one close cooperation partner, Strassenhunde Kreta in Germany.
Speaking to Greek Reporter, Niki says: “It is clear that the shelter can’t run only with volunteers, since everyone can only give as much of their time as is possible.”
Niki says she has been working in the shelter for four years; she was first fostering dogs, but eventually continued to help at the shelter.
She still has two dogs which she has saved from the streets or from abuse. She also has a rescued, paralyzed sheep named Yiannoula, who moves in a wheelchair and is waiting for her new life at an animal sanctuary in the U.K.
Niki says she was raised to help others. “I have great parents who taught me to appreciate and love animals. They told me that life is meaningful when you give from what you have to others.
“I’m very lucky and want to help others who are not as lucky.”
As always in voluntary organizations, money is an issue. They get donations from private individuals but do not receive any financial help from the government — the shelter doesn’t have a steady income.
Especially during the winter, when there are no tourists, money is usually found from the volunteers’ wallets.
Approximately 60 kilograms of adult food and 10 kilos of puppy food are consumed every day, and the animals also need a lot of medicines. Many of the dogs come to the shelter in a bad condition. Surgeries and vet trips are another big expenditure.
Niki says she often thinks of the future of the shelter: “I wish that in the future we could use our energy to take even better care of the dogs instead of doing constant fundraising.”
She dreams that one day the strays problem in Crete will be solved and that all animals will have a home: “Even though this scenario could eventually happen, I don’t think I would stop volunteering – help is always needed in this world.”