Prince Charles and his Roots in Greece

By Philip Chrysopoulos
May 10, 2018
Facebook
Twitter
WhatsApp
Linkedin
Email
When Prince Charles said that Greece is in his blood upon his first official visit to the country, he was not just speaking metaphorically, as both his father and grandfather were born in Greece.
The grandfather of the Prince of Wales, Prince Andrew of Greece and Denmark, was born at Tatoi Palace, on the outskirts of Athens in 1882. His father, Prince Philip, the Duke of Edinburgh, was born on the island of Corfu, at Mon Repos Palace, in 1921.
Prince Charles has visited Greece several times, but always privately. He has visited Mount Athos a few times, while he often enjoys his summer vacations on the Greek seas. Last summer, for instance, he took a mini cruise in the Ionian Sea with his wife Camilla, Duchess of Cornwall.

Charles’ grandparents and Greece
Prince Andrew of Greece and Denmark (1882-1944) was the seventh child and fourth son of King George I of Greece and Olga Constantinovna of Russia. He was the grandfather of the present Prince of Wales.
Prince Andrew was an officer in the Greek army, who also served in the Balkan Wars (1912-1913). In 1913, his father was assassinated and Andrew’s elder brother, Constantine, became king. Constantine’s neutrality policy during World War I led to his abdication, and most members of the royal family, including Andrew, were exiled.
After the royals’ return a few years later, Andrew fought again in the Greco-Turkish War (1919–1922), but the war went badly for Greece, and Andrew was blamed, in part, for the catastrophic loss of Greek territory.
The court martial was about to sentence him to death for his decisions,  but General Theodoros Pangalos intervened and saved him, on the grounds that his “great inexperience of commanding upper ranks”. Andrew was exiled for the second time in 1922, and spent most of the rest of his life in France.

Prince Andrew was estranged from his wife, Princess Alice, but was never divorced from her. He spent the rest of his life in Monte Carlo, dying on Dec. 3, 1944 from a heart attack. His body was transported to Greece was and buried in the royal cemetery at Tatoi.
Charles’ grandmother, Princess Alice of Battenberg (1856-1969), was diagnosed with schizophrenia and committed to a sanatorium in Switzerland, thereafter living separately from her husband. Allegedly, Princess Alice believed that she possessed healing powers and that she had come into erotic contact with Jesus Christ.
After her recovery, she returned to Greece in 1938 whereupon she devoted most of her remaining years to charity work. She stayed in Athens during World War II, courageously sheltering Jewish refugees. She was also responsible for the management of many orphanages and clubs, doing valuable social work during the years of the German Occupation.
In 1949 Princess Alice moved to Tinos to establish a convent, even trying to take on its construction herself. She lived as an Orthodox nun until the end of her life in 1969. 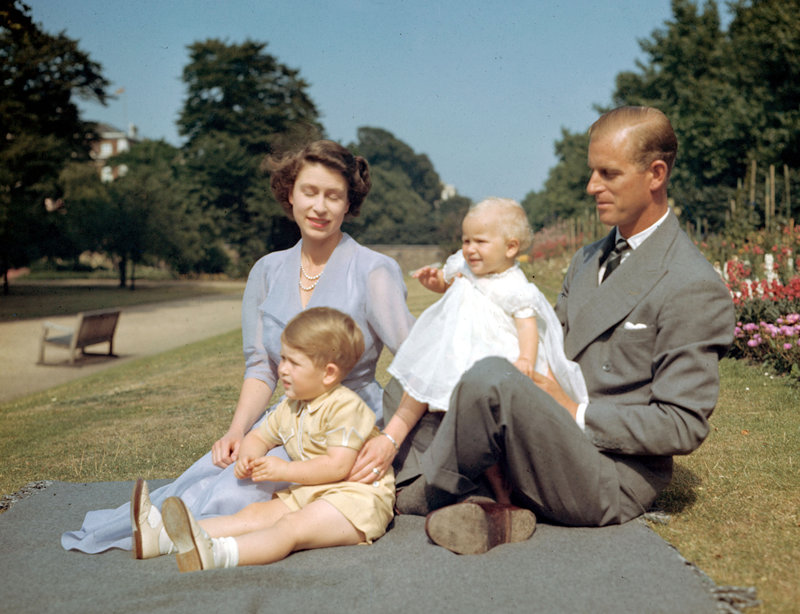 Britain’s Princess Elizabeth, later Queen Elizabeth II, Prince Philip and their children Prince Charles and Princess Anne, London, 1951. (AP Photo/Worth)
Queen Elizabeth and Prince Philip have never visited Greece
Queen Elizabeth II and Prince Philip, Duke of Edinburgh, have visited almost 200 countries and all of the EU countries. Except for one: Greece. In all the many years of her reign, they never once visited Greece, the land of his birth, not for one day.
This is especially noteworthy given the fact that Prince Philip, Charles’ father, was born on Corfu, and his grandfather, King George I, was the longest-ruling King in Greece.
The answer seems quite very simple: Queen Elizabeth definitely feels an aversion to a country that drove its kings into exile and even sentenced Prince Andrew, Philip’s father, to death, regardless of the fact that Prince Andrew was not actually executed, but rather exiled.

Surely, it seems Prince Philip feels a dislike for the country. On the other hand, he only lived in Greece for one year as an infant, as his family was exiled in 1922.
Also, Prince Andrew and Princess Alice were two highly controversial personalities, with his mother never offering him the security a family gives to a child.
Prince Philip needed a father, but there was never anyone there. He lived an extraordinarily lonely childhood. His parents’ marriage broke up when his mother was diagnosed with schizophrenia, and later, after being released from the sanatorium, she dedicated herself for the rest of her life solely to God.
As a consequence, the young prince grew up with an assortment of relatives and constantly changed schools. His relatives may have cared for his education, but never offered him the emotional support he so desperately needed.