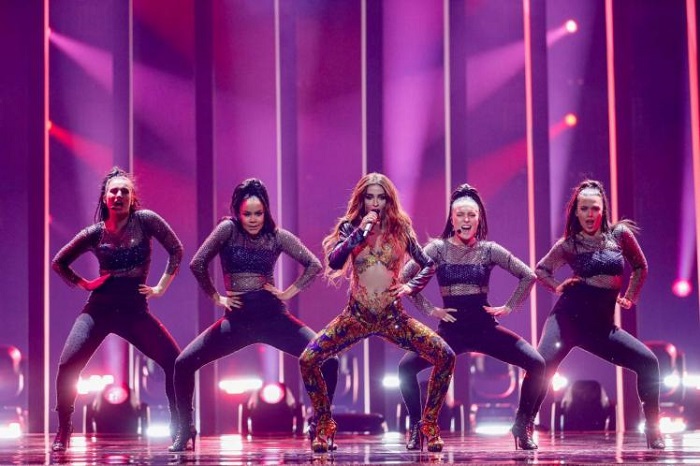 Cyprus has emerged as one of the favorites of Eurovision 2018 as Greece bowed out from the competition following the first round of semi-finals that took place in Lisbon on Tuesday evening.
Eleni Foureira, representing Cyprus with the modern and as the title suggest, very fiery song “Fuego” gave a magnificent performance at Lisbon’s Altice Arena that made many insiders believe that Cyprus could be about to win Eurovision for the first time.
Her odds of winning went from 66-1 to 5-2 after Tuesday’s semi-finals.
Eleni Foureira was born in 1987 in Albania and is a pop singer and actress. She started her solo career in 2010 with the release of her first album. Dubbed the ‘Queen of Pop’, the singer has had several successes in both Greece and Cyprus.


It was a disappointing night for Greece represented by Yianna Terzi with the song “Oniro Mou” that she wrote and composed alongside Aris Kalimeris, Michalis Papathanasiou and Dimitris Stamatiou.
The song and the performance did not live up to expectations and Greece became one of the 9 countries eliminated.

Nineteen artists – who performed in a random order – competed for the 10 tickets to the Grand Final on Saturday May 12.
The fates of the semi-finalists were decided by a combination of votes from national juries and viewers.
The full list of qualifying countries were: Albania, Austria, Bulgaria, Cyprus, Czech Republic, Estonia, Finland, Ireland, Israel and Lithuania.
A further 18 countries will take part in the second semi-final on Thursday ahead of the grand final on Saturday night.