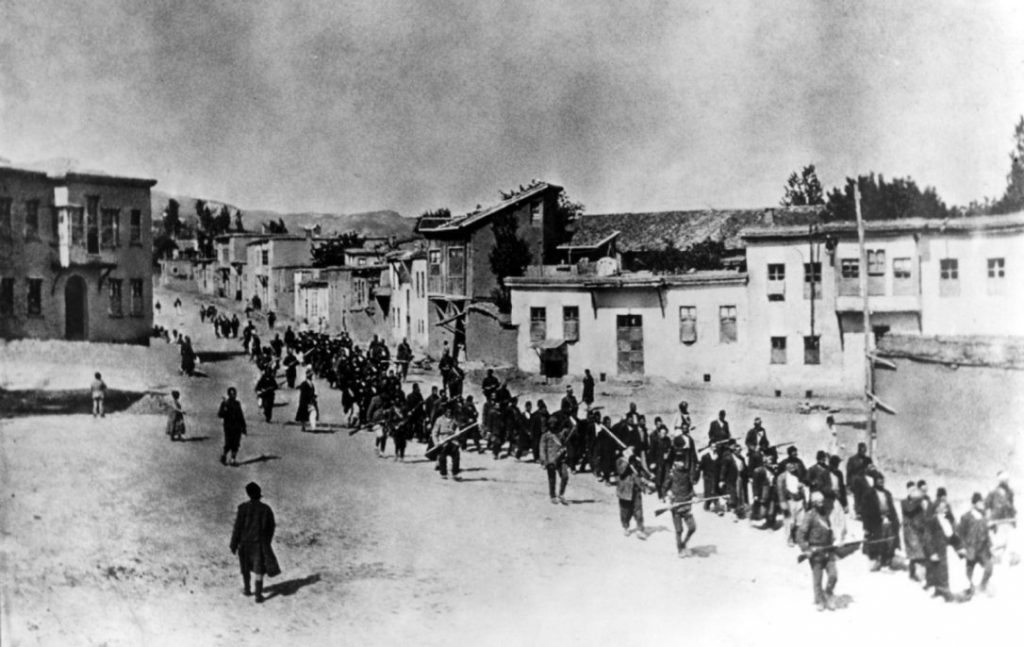 The starting date of the Armenian Genocide is conventionally held to be 24 April 1915, the day that Ottoman authorities rounded up, arrested, and deported from Constantinople (now Istanbul) to the region of Ankara 235 to 270 Armenian intellectuals and community leaders, the majority of whom were eventually murdered. The cleansing continued during and after World War I resulting in the massacre of millions of Armenians, Greeks and Assyrians of Anatolia.
The persecution of Armenians in the Ottoman Empire started in 1914. Initially, it was just boycotting Armenian businesses and shops. But within months it culminated into acts of violence and the murder of key Armenian politicians and persons of importance. By April 15, 1915, almost 25,000 Armenians are slain in the Van province.
On April 24, 1915, the Ottomans arrested 250 Armenian intellectuals and community leaders in Constantinople and sent to Chankri and Ayash, where they were later slain.
On the same day, the editors and staff of Azadamart, the leading Armenian newspaper of Constantinople, were arrested to be executed on June 15 in Diyarbekir, where they had taken and imprisoned.
The Armenian Patriarch of Constantinople and Zohrab and Armenian deputy in the Ottoman Parliament petitioned to the Turkish authorities on behalf of the arrested Armenians of Constantinople. The answer was that the government was dissolving the Armenian political organizations.
Within nine months, more than 600,000 Armenians were massacred. Of those who were  deported during that time, more than 400,000 died of the brutalities and privations of the southward march into Mesopotamia, raising the victims to one million. This became known  as the Armenian Genocide.
In addition, 200,000 Armenians were forcibly converted to Islam to give Armenia a new Turkish sense of identity and strip the Armenian people of their past as the first Christian state in the world.
On August 30, 1922, Armenians who were living in Smyrna were victims of more Turkish atrocities. The “Smyrna Disaster” of 1922 that aimed at Christian Greeks who were living in the seaside city involved thousands of Armenians. Turkish soldiers and civilians set all Greek and Armenian neighborhoods on fire, forcing the fleeing of Greeks and Armenians to the harbor, where thousands were killed or drowned.
On April 24, 1919, prominent figures of the Armenian community that had survived held a commemoration ceremony at the St. Trinity Armenian church in Istanbul. Following its initial commemoration in 1919, the date became the annual day of remembrance for the Armenian Genocide.
Yet, ever since the horrific events of 1915, Turkey is methodically denying the Armenian genocide. But despite Turkish denials, it is unanimously verified by the International Association of Genocide Scholars and accepted by nations that uphold moral responsibility above political purposes.

The Great Fire of Smyrna

"Remembering, it's a basic respect to those who died"Remembering the Armenian, Greek, and Assyrian Genocide that started on April 24, 1915 and continued for almost a decade.