TechNews
GreekReporter.com Business Parthenon Seawall Will Harness The Power Of The Oceans

Parthenon Seawall Will Harness The Power Of The Oceans 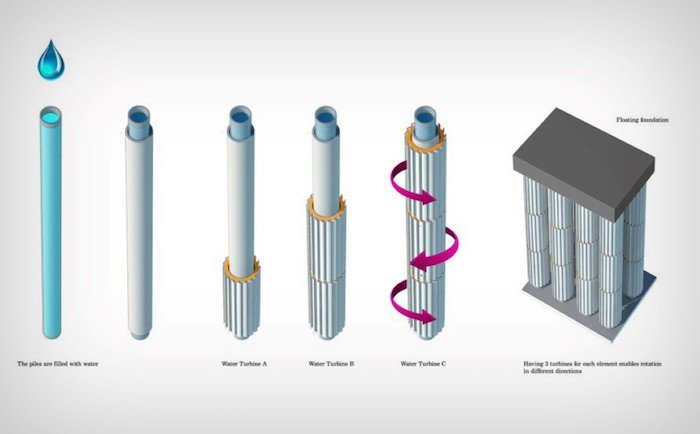 Poseidon was renowned for his mastery of the seven seas. Now man has built a “Parthenon Wall” that will both protect coastlines from the rising seas and create energy. Netherlands-based architecture firm Waterstudio led by Architect Koen Olthius has created the innovatively designed seawall.

The studio’s mission statement is “developing solutions to the problems posed by urbanization and climate change.” The Parthenon Seawall – a floating breakwater that doubles as an energy generator – promises to do exactly that. The columns aren’t a mere design whim. Whereas traditional seawall structures are built to both protect coastlines and disrupt tidal flows from reaching land, the Parthenon seawall will also harness those tides to created electrical power.

According to Alternate Energy, “tidal energy or tidal power as it is also called, is another form of hydropower that utilizes large amounts of energy within the ocean’s tides to generate electricity. Tidal Energy is an ‘alternative energy’ that can also be classed as a ‘renewable energy source,’ as the Earth uses the gravitational forces of both the moon and the sun every day to move vast quantities of water around the oceans and seas producing tides.”

The motion of the tidal water, driven by the pull of gravity from the moon, possesses large amounts of kinetic energy “in the form of strong tidal currents called tidal streams.” The daily ebbing and flowing, back and forth of the ocean’s tides along a coastline and into and out of small inlets, bays or coastal basins is no different to the water flowing down a river or stream which man has traditionally used to create to harness hydro-electric power.

Check out the other cool water-based homes and developments on their site.