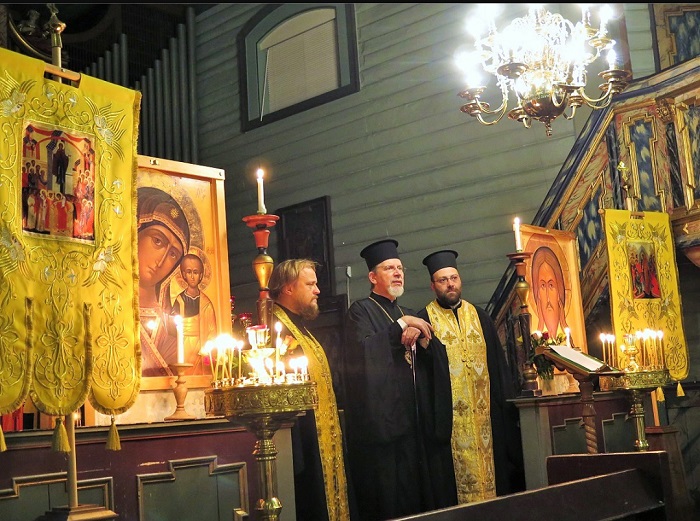 His Eminence Metropolitan Cleopas of Sweden and All Scandinavia made his first archpastoral visit to Bergen on the weekend of October 28-29, 2017 to preside over the establishment of the parish of the Holy and Glorious Holy Martyr Chrysostom of Smyrna.

The parish will serve the spiritual needs of the Orthodox Christian faithful living in the Norwegian city of Bergen and the greater Hordaland area.

The new parish in Bergen is the fifth new parish to be established by the Ecumenical Patriarchate’s missionary eparchy in Scandinavia, following the founding of the parishes of St. Cleopas the Apostle in Kalmar, the Entrance of the Theotokos in Borås, Sts. Constantine and Helen in Jönköping, and St. Nectarios in Stavanger, as well as the St. Nicholas Hermitage in Rättvik. 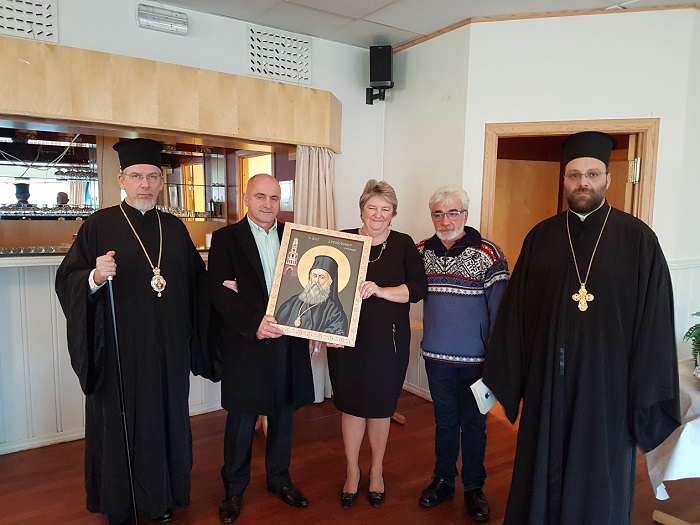 On Sunday, October 29, 2017, the Archieratical Divine Liturgy was celebrated at the Russian Church of the Epiphany in Bergen, presided over by Metropolitan Cleopas, who was assisted by Rev. Loukatos, the local Russian parish priest, Rev. Presbyter Fr. Dmytro Ostanin, and the Rev. Presbyter Fr. Theodor Svane of the Ecumenical Patriarchate’s Exarchate for Orthodox Parishes of the Russian Tradition in Western Europe, who also serves as a military chaplain of the Royal Norwegian Navy.

Following the conclusion of the Divine Liturgy, the Metropolitan announced the formation of the new parish of St. Chrysostom Metropolitan of Smyrna the Holy Martyr, and presented the members of the parish council with their letters of appointment, while wishing them every success and strength from above in their new duties. 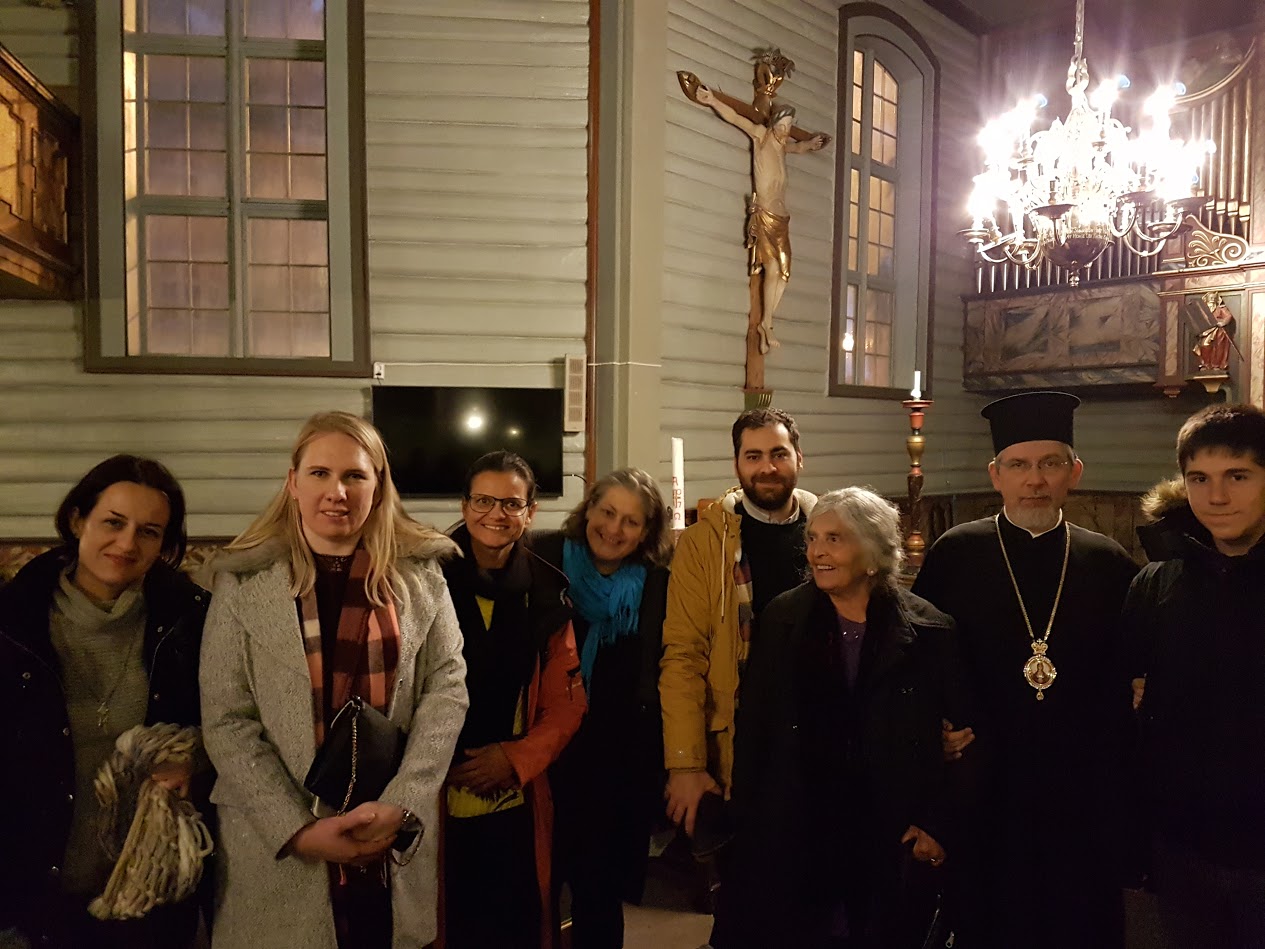 In his sermon, Metropolitan Cleopas pointed out reasons that inspired him to dedicate the new parish to the blessed memory of St. Chrysostom, placing special emphasis on the mentality of the Christian struggle, unwavering faith, and forbearance present in the martyrdom of this modern-day saint – virtues which should inspire all Christians.

The Metropolitan also spoke about the unforgettable homelands of Asia Minor, from where he himself hails from his father’s lineage.

Metropolitan Cleopas expressed his enthusiasm and how touched he was over the presence of so many Greek Orthodox faithful in the church – many of whom travelled for hours together with their families to attend the service, while also praising the tireless pastoral care exhibited by Fr. Alexander, who is visiting Bergen to celebrate holy services for the fifth time.

The Divine Liturgy was celebrated in Greek, English, Russian, and Norwegian, with the hymns being chanted by Mr. Panagiotis Pavlos, head chanter of the Metropolitan Church in Oslo, aided by Mr. Cosmas Plakou and members of the Russian parish’s choir, thus promoting the ecumenical dimensions of Orthodox Christianity and the spirit of collaboration that characterizes the Orthodox Christian faithful in Scandinavia, considering that Orthodox faithful from 13 nations were on hand to join in common prayer at the Divine Liturgy.

Following the Divine Liturgy, Metropolitan Cleopas blessed the youth of both parishes, offering them an icon as a blessing, and sat down to a luncheon that was offered on site.

Afterwards, the Metropolitan and his associates attended an event organized by the Hellenic-Norwegian Association of Bergen, following the kind invitation of the latter. 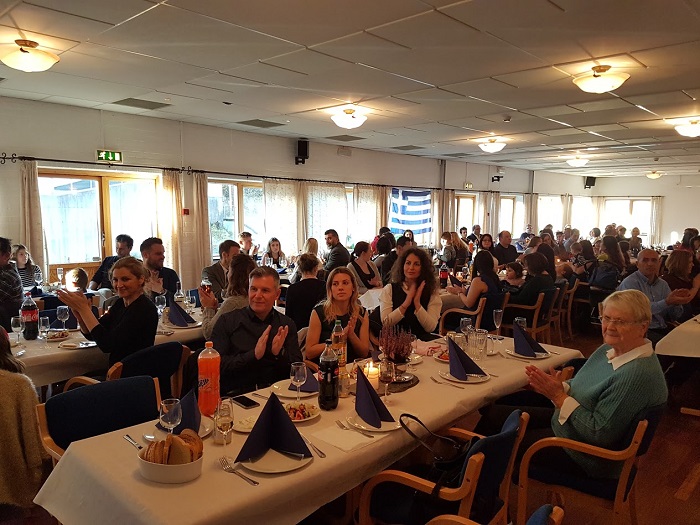 Mr. Antonios Trypodianos, President of the aforementioned association, welcomed Metropolitan Cleopas and his associates and spoke about how touched the local members were over his presence at their event, which was dedicated to the Greek National Day of October 28, 1940.

The Metropolitan subsequently congratulated Mr. Trypodianos and his aides for the activities being undertaken by the association and offered him a copy of his study on St. Nectarios of Pentapolis.

Afterwards, he offered an icon of St. Chrysostom of Smyrna the Holy Martry, which was painted and offered by iconographer Mr. Michail Androutsos of Ioannina to the two pioneering members of the newly founded parish, parish council member Mr. Vasilios Balantanis and his wife Mrs. Merete Karlsen, who serves as secretary of the aforementioned association.

The Metropolitan also encouraged all those in attendance to maintain the excellent cooperation and mutual solidarity exhibited between the parish and the association for the benefit of the local Community and particularly the youth.