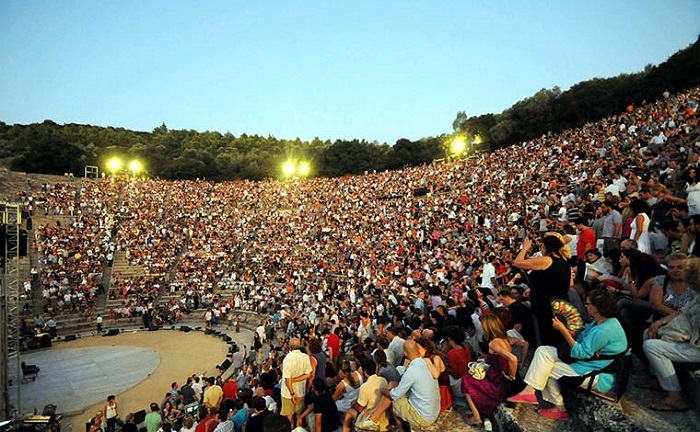 Dutch researchers say the acoustics of the theatre at Epidaurus are not as dazzling as they have been hailed.
Dating from the fourth century BC, and seating up to 14,000 spectators, the theatre has long been admired for its sound quality, with claims that audiences are able to hear a pin drop, or a match being struck, from any seat in the house.
The Guardian newspaper reports that new research conducted by Constant Hak; assistant professor at the Eindhoven University of Technology and his team, suggests such assertions are little more than Greek myth.
In a series of conference papers, which also involved experiments at the Odeon of Herodes Atticus and the theatre of Argos, Hak and colleagues describe how they tested the claims. 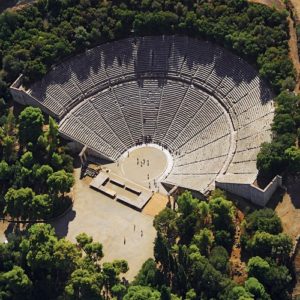 They used 20 microphones , placing each one at 12 different locations around the theatre of Epidaurus, together with two loudspeakers, one at the centre of the “stage” – or orchestra – and one to the side.
Both speakers played, with a slight delay between them, a sound that swept from low to high frequency, with the speakers in five different orientations. In total, they made approximately 2,400 recordings.
The team then used the data to calculate sound strength at different points in the theatre.
They then made a series of laboratory recordings of sounds, including a coin being dropped, paper tearing and a person whispering, and played them to participants, who adjusted the loudness of the sounds until they could hear them over background noise.
The results were then fed into the team’s calculations to reveal how far from the orchestra the different sounds would be heard.
While the sound of a coin being dropped or paper being torn would be noticeable across the whole theatre, it could only recognisably be heard as a coin or paper halfway up the seating. For a match striking, the situation was worse, while a whisper would only be intelligible to those in the front seats.
Further work, based on the loudspeakers playing voices, revealed that only when actors spoke up loudly would their words be intelligible in the seats furthest from the orchestra.
However, a number of scientists interviewed by the Guardian newspaper, say the research is missing the point.
Armand D’Angour; an associate professor of classics at the University of Oxford, said that, while the research reveals the state of the acoustics now, it does not necessarily shed light on the past.
“The research is based on theatre that has changed over the centuries, so it looks terribly precise and mathematical but in the end, we cannot be at all confident that the way it sounds today exactly replicates the way it would have sounded then,” he said, adding that research has suggested that the Greeks might have used all manner of devices to amplify sound, including placing hollow vessels at strategic locations.
Damian Murphy; professor of sound and music computing at the University of York, said that, while the research was probably the most detailed yet into acoustics of such sites, it was hard for modern minds to understand quite what the experience would have been like for ancient theatregoers.
“Any performing arts venue – it is not just about what they sound like, it is about the experience of going there,” he said.