September 26, 1687: When the Venetians Bombarded the Parthenon 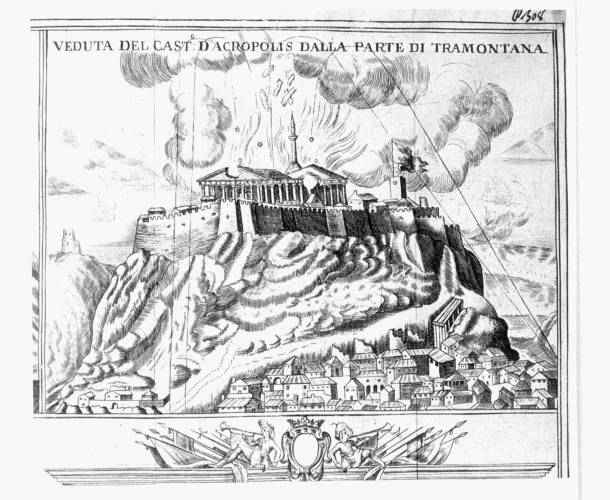 During the Ottoman rule in Greece, after the fall of Constantinople in 1453, the Parthenon was converted to a mosque, and the Erechtheion functioned as a harem.
In 1683, the Ottoman Empire was advancing in Europe trying to conquer as much land as possible.  They tried to take Vienna, but failed.  After that, Austria, Poland, the Pope, and Venice, allied with the goal of re-conquering all European lands that the Ottoman Empire occupied.
The mercenary army that was assembled for the task (often referred to as the “Venetian” army) under the command of the Venetian Morosini freed Moreas (Peloponnese) and in 1687 landed in Athens.  The occupying Ottomans fortified themselves on the Acropolis.
During the ensuing siege, the Acropolis was bombarded continuously for eight days, and on September 26, 1687, a Venetian mortar shell hit the Parthenon, that the defending Ottomans were using as a storage magazine for their gunpowder.  The explosion blew apart the long sides of the Parthenon, and the ensuing fire that lasted for two days left the building in the skeletal state we see today.
The battery was commanded by Antonio Muitoni, Conte di San Felice, and the artificer’s name was Sergeant di Vanny.
The force of the explosion led the Ottomans to surrender, and the Venetian general Morosini further damaged the building in his unsuccessful attempt to remove the sculptures of the west pediment.
However, the Ottomans expelled the Venetians a year later.  The Acropolis was transformed into part of the city with many small homes scattered around its ground and a small mosque inside the ruined Parthenon.