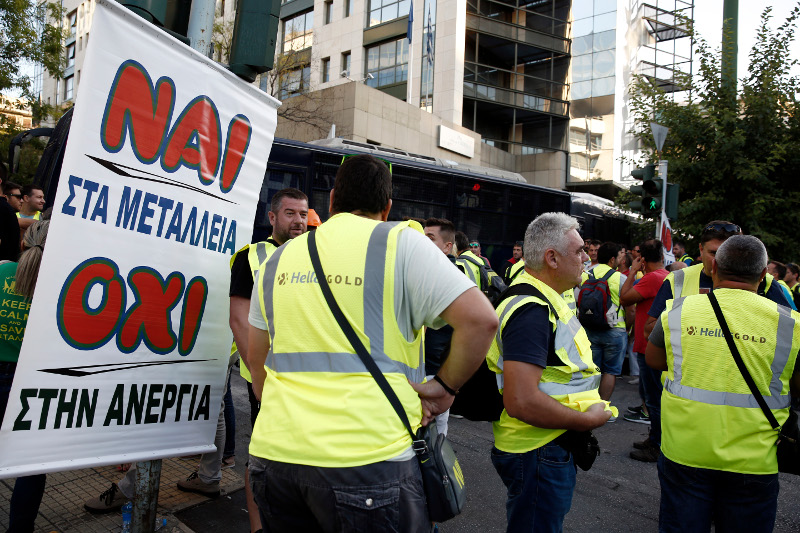 Hundreds of miners from the Chalkidiki region gathered outside the Ministry of Environment and Energy on Thursday to protest against the State’s unwillingness to provide certain permits to their employer, Eldorado Gold.
The Canadian mining company has given an ultimatum to pertinent authorities to issue a permit to continue works at the Skouries mine, in the Chalkidiki region in northern Greece. The ultimatum expires today (Thursday), with Eldorado Gold saying that it will suspend activities at the Skouries mine. Subsequently, the Olympias mine may suspend operations as well. The miners fear that they might lose their jobs.
There is an ongoing back and forth between Environment Minister Panos Skourletis and Eldorado Gold. The Greek minister claims that the mining activities threaten the environment in the area. The Canadian company, on the other hand, claims that it has completed all the environmental safety prerequisites. The two sides went to arbitration.
About 1,500 miners on 30 buses arrived outside the environment ministry on Thursday morning, the day the Eldorado Gold has given as a deadline. About 2,000 workers are employed by Eldorado Gold, with over 500 of them at the Skouries mine, and their jobs hang in their balance, one miner told Skai television reporters. The protester said that the government is insensitive to their needs and they care more about their political posturing than people’s jobs.
The miners marched from the environment ministry to the Greek Parliament and then to Maximos Mansion, asking to meet with the prime minister. Strong police forces did not allow protesters to approach the mansion.