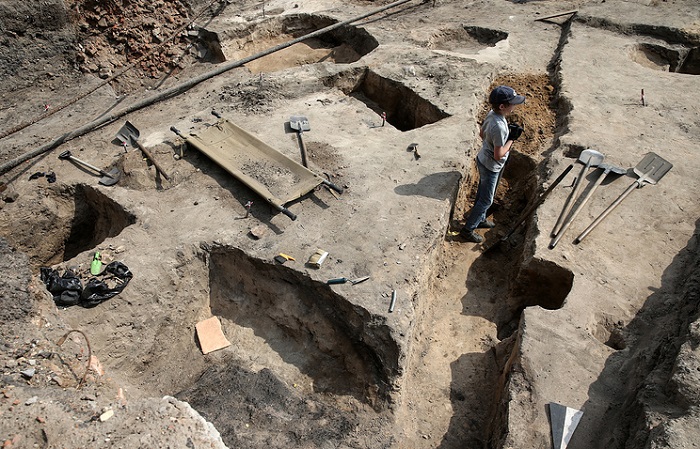 Archeologists have unearthed a fortress in Russia’s Krasnodar Region, which was supposedly founded by Greek colonists in the fifth century BC, head of the expeditions department at the Research Center for Cultural Heritage Preservation Ivan Tupalov told TASS.  He added, that the citadel had been found in the area where an energy bridge to Crimea is under construction

“Security work was underway in connection with the construction of the energy bridge between Rostov and Taman [the part of the energy bridge that would incorporate Crimea in Russia’s energy grid, ensuring uninterrupted power supply to the peninsula – TASS],” he said. “During excavations, an ancient fortress was unearthed. Judging by its fortifications, it was a Greek citadel founded by colonists, who came to settle the Black Sea coast… Such discoveries are not made every day,” Tupalov added.

According to him, the fortress is estimated to date back 2,500 years, as it is believed to have been built approximately in the fifth century BC. Its walls were made of mud bricks, which is why they did not last until today, but some traces can be seen in places where the ditch was and where towers once stood. The citadel had an area of around eight hectares. In the seventh and eighth centuries AD, the earth ramparts left over from its walls were turned into a burial ground, while in the past decades, the area was partly occupied by fields.

Tupalov said that scientists have yet to find answers to a lot of questions. The number of the citadel’s residents is still unknown (it can be estimated based on the number of the uncovered ceramic sherds). Another puzzling question is whether during ancient times, the Kuban River was connected to the sea by a firth or did the Greeks build their fortress on the seashore, or did they move deep inland, something which was uncommon for them.

In addition, Archeologists have found a number of noteworthy artifacts. “For instance, a bowl has been excavated which has an interesting picture of figures engaged in a dance resembling the ‘sirtaki’ dance,” Tupalov said. “Besides, there are various small incense burners as the Greeks were very fond of fragrances, there are also pieces of jewelry and ceramic sherds,” he added.

The Greeks, who came to the territory of the present-day Kuban in the fourth century BC, established their or colonies on the sea coast. They founded the Bosporan Kingdom on the shores of the Black Sea and the Sea of Azov, spreading their civilization and peacefully coexisting with peoples living on the Taman Peninsula. In the fourth century AD, the Hun tribes drove the Greeks out of this area.