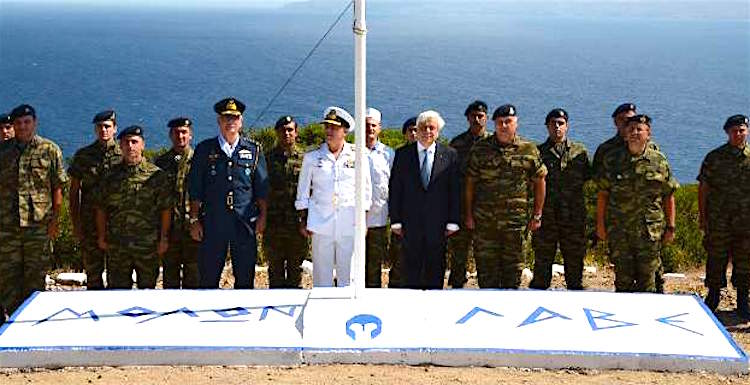 President of the Hellenic Republic Prokopis Pavlopoulos responded to provocations by Turkey using the ancient Greek phrase “Molon Labe,” which means come and take [them].
Pavlopoulos was on the Greek island of Agios Efstratios where he laid a wreath in memory of the first lieutenant Nikos Sialmas, whose plane crashed after engaging in a dogfight with Turkish fighters in 1992.
In a speech after the ceremony, Pavlopoulos talked about the “sacred memory” of Nikos Sialmas describing him as a hero.
He praised the Greek Armed Forces and continued: [Sialmas] sends a message to anyone who provokes and aspires to invade Greece. The only message that our history and our ancestors have taught us:”Molon Labe.”
A few hours earlier, Turkish warplane pilots warned the Greek pilot of the helicopter carrying Pavlopoulos that he had entered Turkish FIR when in fact the helicopter was flying over Greek territory.
The helicopter carrying Pavlopoulos and the accompanying helicopter were flying over the island of Panagia, when at 9:35 am and 9:37 am the Turkish pilots informed, via radio, that the Greek pilots were flying in Turkish airspace and they had to leave.
The Greek pilots, knowing that they were in Greek airspace, did not respond to the Turkish provocation and continued their course.
This was the second incident of the sort, as the same happened on Tuesday. The army helicopter carrying the Greek President on a tour in the Aegean received a radio message from a Turkish airforce saying that it was flying inside a demilitarized zone and such flights are forbidden.