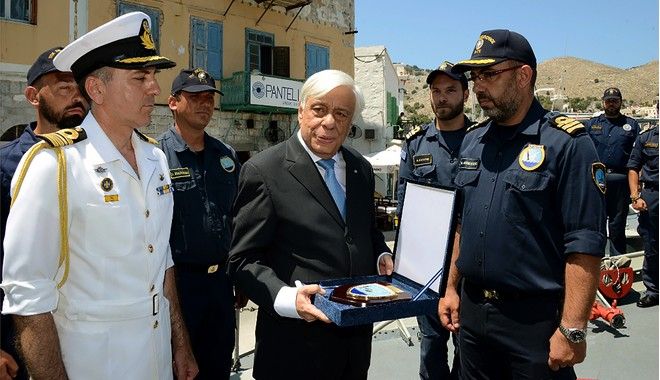 Turkish provocations against the helicopter carrying Greek President of the Republic Prokopis Pavlopoulos were repeated on Wednesday, as Turkish warplane pilots warned the Greek pilot that he had entered Turkish FIR when in fact the helicopter was flying over Greek territory.
The helicopter carrying Pavlopoulos and the accompanying helicopter were flying over the island of Panagia, when at 9:35 am and 9:37 am the Turkish pilots informed, via radio, that the Greek pilots were flying in Turkish airspace and they had to leave.
The Greek pilots, knowing that they were in Greek airspace, did not respond to the Turkish provocation and continued their course.
Shortly afterwards, the helicopter carrying the President of the Republic landed on the island of Panagia and watched the briefing at the island’s military outpost.
This was the second incident of the sort, as the same happened on Tuesday. The army helicopter carrying the Greek President on a tour in the Aegean received a radio message from a Turkish airforce saying that it was flying inside a demilitarized zone and such flights are forbidden.
Pavlopoulos is visiting Hellenic Army outposts on islands of the Aegean, such as Farmakonisi and Agathonisi.
Shortly after the incident with the helicopter carrying the Greek President, at 10 am, a pair of Turkish F4 fighters violated Greek airspace by entering the Athens FIR between Lesvos and Lemnos and flew over the Makronissi and Anthropophagi (in the Fourni complex) at an altitude of 8,900 feet. The two Turkish fighters left the Athens FIR at 10:27 between Samos and Kos.