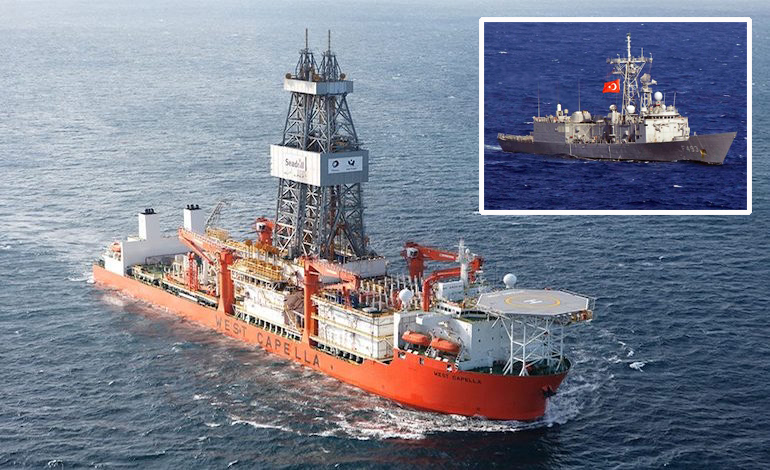 With three consecutive nautical safety warnings, known as NAVTEX, Turkey announced naval exercises and research missions in the south-eastern Aegean and at four plots of the Cyprus EEZ.
As daily Kathimerini reports, with NAVTEX 710/17, Ankara announced a three-day research mission (22-25 July) of the oceanographic “Cesme” in the international waters around Kastellorizo.
In an adjacent area, within Turkish territorial waters, Ankara announced through NAVTEX 713/17 a naval exercise on July 19th.
From a period between July 17 and December 16, Turkey has issued NAVTEX 711/17 for seismic surveys in areas containing large portions of plots 1, 5, 6 and 7 of the Cyprus EEZ.
The research will be carried out by the vessel “Barbaros Hayreddin Pasa,” accompanied by two support boats (“Bravo” and “Apollo Moon”).
The paper says that Turkey’s actions to the west of Paphos and around Kastellorizo ​​reflect the firm Turkish view that Ankara can also exercise sovereign rights, including the exploitation of hydrocarbons, at these two specific areas.
The Greek Foreign Minister, Nikos Kotzias, is visiting Cyprus on Tuesday to take part in a special meeting of the National Council for the failed negotiations in Switzerland.
Mr. Kotzias described his visit to Cyprus as an opportunity to better prepare for “future negotiations,” as well as a discussion on “security and stability issues in the region.”
According to the Turkish Cypriot press, Turkish Foreign Minister Mevlut Cavusoglu will visit the occupied part of Cyprus in order to meet with the Turkish-Cypriot leadership.