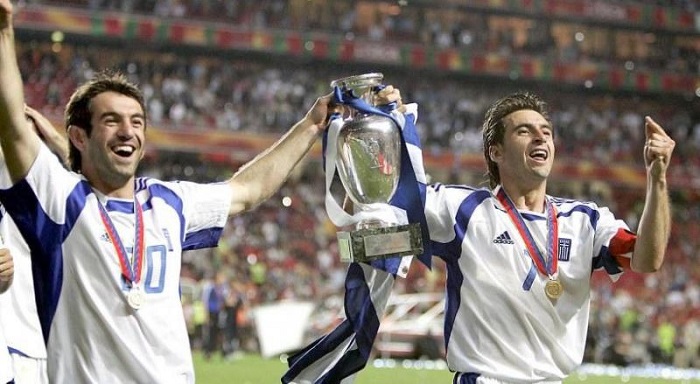 Thirteen years ago, in the summer of 2004, Greek football fans all over the world experienced the ultimate dream as they watched in amazement Otto Rehhagel and his team crowned champions of Europe.
It seems only yesterday when the team returned to Greece to be greeted by 100,000 supporters inside the Panathenaic Stadium in Athens, home of the first modern Olympics in 1896.
Tens of thousands greeted Rehhagel and his heroes as they made the 25-mile journey from the airport to the arena after the players taxied through an archway of water formed by fire engines.
The players basked in glory. They became household names for years to come. Their careers since the 2004 triumph have diverged. Some have become coaches and football mangers. But we also encountered a firefighter, a Member of the European Parliament while some others have discreetly left the spotlight.
These are whereabouts of some of the heroes of 2004 we managed to track down.
Antonis Nikopolidis: The George Clooney lookalike goalkeeper who managed to keep three clean-sheets in the knock-out stage of the Euro. A reliable last line on the rare occasions the Greek defense was breached. After hanging-up his gloves in 2011 he pursued a career in football management.
Traianos Dellas: The “Colossus” of the Greek defense who scored the winning goal in the semi-final against the Czech Republic. Since 2013 he has become a successful football manager. Among the teams he has managed was Athenian giants AEK.
Michalis Kapsis: Together with Dellas they formed the impenetrable duo of Greek defense. He finished his footballing career in 2013 and since then has been working as a fireman in the Fire Service.
Thodoris Zagorakis: The captain of the team played his last competitive game for Greece in 2007. Since then he took over as president of Thessaloniki club, PAOK and later on he gave up on football to concentrate in politics, as he was elected Member of the European Parliament.
Aggelos Basinas: The midfielder who scored on the first game against Portugal and open the road towards the eventual triumph. Since his glory days he has withdrew altogether from football.
Giorgos Karagounis: He gave his heart for the Greek national team and was one of the architects of the triumph in 2004, although he missed the final against Portugal due to suspension. He continued playing at the top of his form for the Greek national team until 2014. He hung up his boots in 2014 to become, briefly, technical director of the Greek Football Association.
Aggelos Charisteas: The golden scorer in Portugal. The striker that scored against Spain, France and Portugal in the final and made all Greeks proud of their national team. Charisteas had an amazing career playing in Europe at the top level with teams such as Werder Bremen, Ajax and Schalke. He stopped playing in 2013 and since then has discreetly withdrew from football.