Family of Hollywood Heavyweight Will Smith Goes Beach-Cleaning on Antipaxi 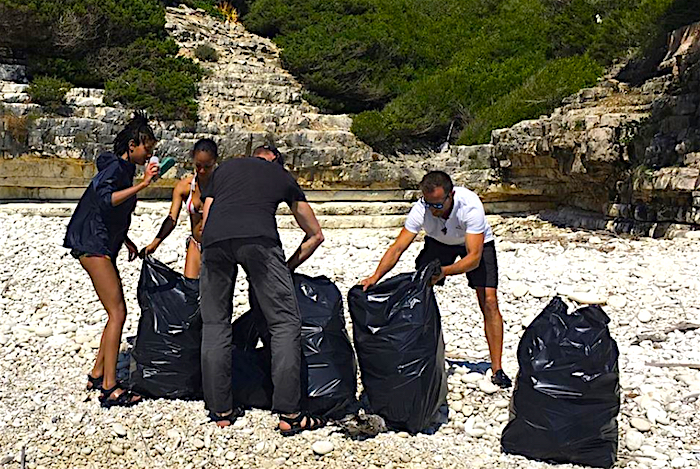 Photographs of the wife and daughter of Hollywood actor Will Smith helping Greek volunteers clean beaches on the island of Antipaxi went viral after they were posted by his daughter Willow on a social media site on Wednesday.
Armed with large black bags, Willow and her mother Jada Pinkett Smith donned gloves and helped four volunteers collect 22 bags of rubbish left behind on three of the beaches on the island, which is famous for its pure white sands and azure waters.
Smith had been holidaying on Corfu with his wife and daughter when they visited the small islands of Paxi and Antipaxi in the northern Ionian for a few days. When they saw the volunteers cleaning remote but beautiful beaches on Antipaxi, the family did not hesitate to lend a hand.
“Being so far away from what I perceive as a polluted metropolis, I couldn’t stand seeing these beautiful beaches in Greece littered with trash,” 16-year-old Willow wrote.
“I saw seagulls, dead on their backs from choking on tiny slivers of plastic and other non-biodegradable materials; They even die from eating fish who have ingested these particle-size slivers. 4 beautiful humans accompanied my mom and I in gathering 22 trash bags full of plastics and urban debris off of 3 small beaches in Antípaxos, Greece. When we see these things on our TV’s or phones it seems far away for some reason; But when it’s right in front of you I feel as though it is humanities responsibility to do as much as we can (in the moment and long-term) no matter how small the action is. As we all start to do our part, we gradually make a difference. Hopefully today we were able to elongate and preserve the beauty & existence of the local sea life.”
(Source: ANA-MPA)