Turkish PM Addresses Greek Muslims of Thrace as Being Turks 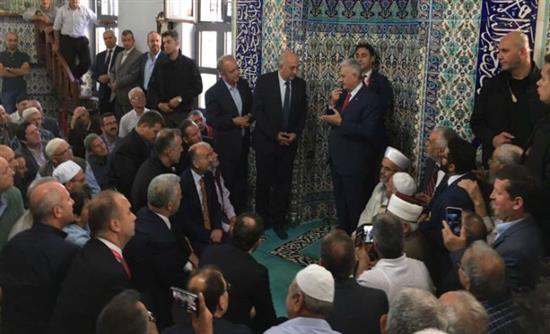 Turkish Prime Minister Binali Yildirim visited the Komotini Mosque on Monday addressing the Muslim population of the area as being Turks.
The Turkish PM visited Thrace after he had official meetings with Greek Prime Minister Alexis Tsipras and President of the Republic Prokopis Pavlopoulos in Athens.
Yildirim was welcomed enthusiastically by crowds of Muslims and spent about 20 minutes inside the mosque. He then visited the Turkish Consulate before leaving for the Iftar meal at Lykeio village at 10 pm.
Addressing the crowd of Thrace Muslims, Yildirim conveyed his greetings from Recep Tayyip Erdogan and spoke about the talks he had in Athens with the Greek officials:
“In Athens, in our meeting with the prime minister, we evaluated the bilateral issues and we decided jointly instead of insisting on the issues we do not agree with, starting with what we agree on. And then move on to the issues of disagreement through dialogue. We are neighbors and we have a saying: The neighbor needs even the neighbor’s ashes. Therefore, the basic principle of neighborhood is good relations. We have too much to share, why should we fight?” Yildirim said.
“Mr. Erdogan told me that you are also citizens of Greece”
“In addition to his greetings, Mr. Erdogan told me to tell you that other than being of the same origin and religion, you are also a citizens of Greece. For this reason, you must try to work to help this country grow and see its problems as being your own problems. And on the other hand, keep your values ​​and your beliefs. And try to nurture your children with these values. This also applies to our Greek citizens living in Turkey. You, in one respect, are a bridge to develop our relationships. For this reason, we (the minority) do not see it as a problem. You must Know that Turkey is always at your side. We will further develop our relations with Greece through dialogue. We have problems and we will solve them. We have problems in the Aegean, we will solve them. You have problems concerning education, with the muftis. Accordingly, there are expectations of Greece on the subject of the Theological School (of Halki). We will discuss all these issues, we will not avoid them, people solve their problems with conversation,” the Turkish PM said.
In the mosque, Yildirim was accompanied by Deputy Foreign Minister Yiannis Amanatidis, who wished a good Ramadan to the Muslim faithful and referred to the “very good talk” they had with the Turkish Prime Minister in the car. “The visit of the Prime Minister shows us that co-operation and cohabitation with Muslims in Thrace is an example for everyone, for all of Europe and the world.”
After that, Yildirim went to the Turkish consulate in the area, where he had contacts with union leaders and then headed to the Lyceum village for the Ramadan dinner.
The wife of the Turkish prime minister, Semiha Yildirim, had a separate program, as she arrived st Kavala airport at 5 pm and from there went to Komotini where she visited the Eski Mosque and then the so-called “Turkish Youth.” She was welcomed by women and children of the club who prepared a small celebration in her honor.