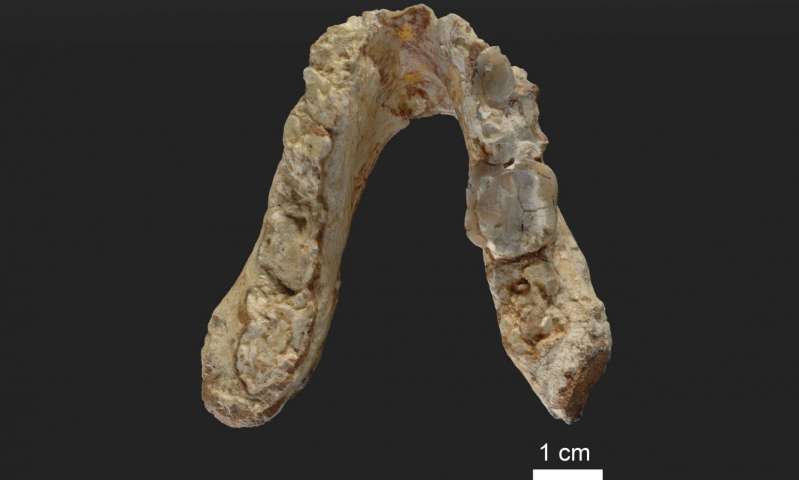 Researchers have found evidence that the split of the great ape and human lineage took place in the Eastern Mediterranean and not in Africa and that the first pre-human walked in the Northern Greece-Balkans area, according to an article on phys.org website.
Up to now, scientists have assumed that the lineages diverged five to seven million years ago and that the first pre-humans developed in Africa.
However, an international research team from Germany, Bulgaria, Greece, Canada, France and Australia headed by Professor Madelaine Bohme from the Senckenberg Centre for Human Evolution and Palaeoenvironment at the University of Tubingen and Professor Nikolai Spassov from the Bulgarian Academy of Sciences believe that the human history started a few centuries earlier and in the general Balkans area.
The scientists investigated two fossils of Graecopithecus freybergi with state-of-the-art methods and came to the conclusion that they belong to pre-humans. Specifically, the two known specimens of the fossil hominid Graecopithecus freybergi: a lower jaw from Greece and an upper premolar from Bulgaria. Using computer tomography, they visualized the internal structures of the fossils and demonstrated that the roots of premolars are widely fused.
“While great apes typically have two or three separate and diverging roots, the roots of Graecopithecus converge and are partially fused — a feature that is characteristic of modern humans, early humans and several pre-humans including Ardipithecus and Australopithecus,” said Bohme.
The lower jaw, which scientists have nicknamed ‘El Graeco,’ has additional dental root features, suggesting that the species Graecopithecus freybergi might belong to the pre-human lineage.
Furthermore, the Graecopithecus is several hundred thousand years older than the previously believed oldest pre-human from Africa, the six to seven-million-year-old Sahelanthropus from Chad. The sedimentary sequence of the Graecopithecus fossil sites in Greece and Bulgaria showed a nearly synchronous age for both fossils — 7.24 and 7.175 million years before present. “It is at the beginning of the Messinian, an age that ends with the complete desiccation of the Mediterranean Sea,” Bohme said.
Professor David Begun, a University of Toronto paleoanthropologist and co-author of the study, added, “This dating allows us to move the human-chimpanzee split into the Mediterranean area.”