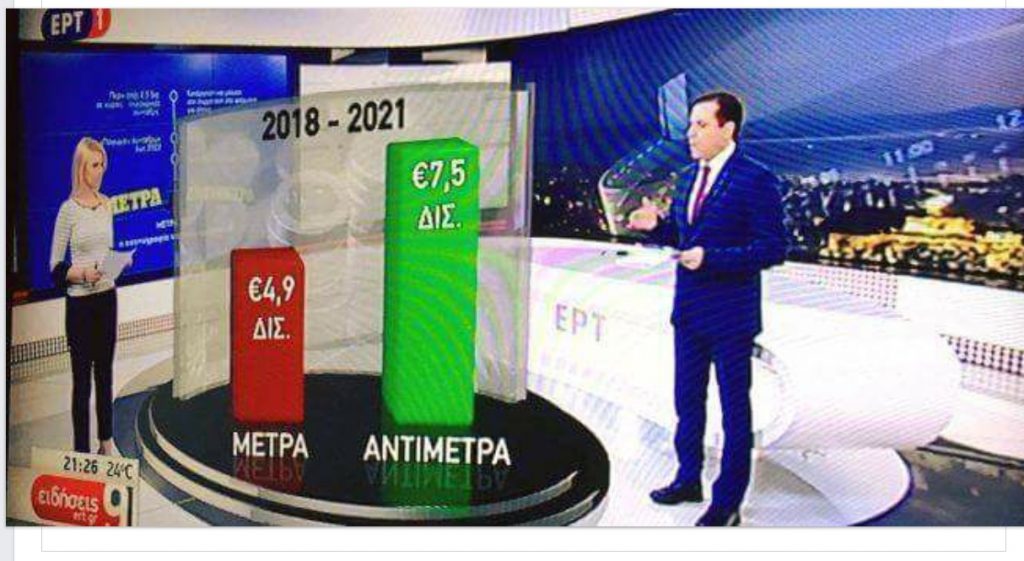 If an outsider watched the news on Greek public television, they would think that Greece is already a country on the way to economic recovery and growth, governed by politicians with integrity, honesty and such love for the Greek people who they would sacrifice themselves for the good of society.
Contrary to some private television stations where the anchormen sound like doomsayers, watching the news reports on ERT1, ERT2, ERT3 along with the programs of the Parliament station (Vouli TV) you would get a different picture of Greece. Ministers and MPs of the ruling coalition appear on public TV telling Greek people that everything is alright, that the prime minister is doing his best to bring back the long-gone prosperity and that the evil forces of neoliberalism (the catchword of the past two years) represented by the International Monetary Fund and Germany along with the even more evil opposition parties want to keep Greece in the shackles of austerity.
In the past few days when the government that promised to put an end to austerity unflinchingly voted another 4.9 billion euros worth of austerity measures, public television tried their best to convince viewers that the measures come along with positive countermeasures worth 7.5 billion euros! Or, as we Greeks say, they told us that donkeys fly and if we don’t believe that we are victims of the New Democracy propaganda.
The countermeasures are a clever invention of the SYRIZA-ANEL administration in order to avoid admitting that they signed a harsh, fourth Memorandum of Understanding with creditors. Plain and simple. Creditors agreed to the so-called countermeasures but under two conditions: that Greece maintains primary surpluses above 3.5% of GDP annually through 2021 and creditors would approve the implementation of the countermeasures based on the state of the Greek economy.
The figures presented by ERT defy logic and mathematics. Their alchemy is not convincing. If indeed the countermeasures are worth 7.5 billion, what’s the point in waiting? Why don’t creditors give us right away the difference of 2.6 billion euros to boost our economy?
Unfortunately, ERT is no longer public television. It has turned to state television, a sad vehicle of government propaganda. This is not new. In July 2015, ERT1, ERT2 and ERT3 served blatantly as government tools to promote the “No” in the referendum. Regardless of the fact that later Alexis Tsipras defied the “No” of Greek people and capitulated.
Today, as the lies of the Greek government become more flagrant, so is the propaganda on state television. In the news reports, the fourth Memorandum of Understanding is presented as the one that would get us out of…the memoranda. The austerity measures are presented as forerunners of measures for growth. There are never reports of disgruntled and miserable people on the street. Anything that would remotely blemish the picture of the government is absent. Government officials appear on ERT complacent and optimistic, proud of their work and their love for Greek people, repeating the same lies while spewing sarcasm and venom at the opposition parties.