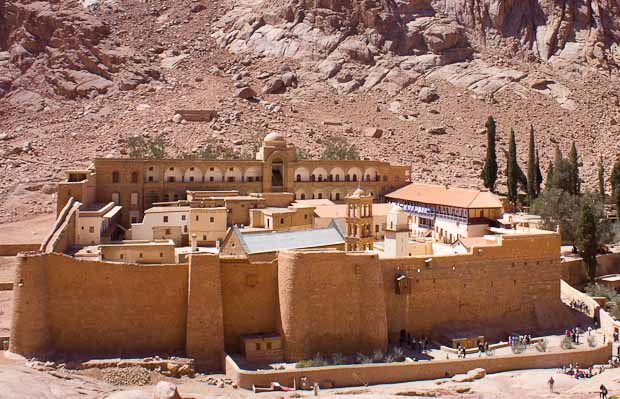 An Islamic State attack on the police outpost of the Hagia Aikaterini Holy Monastery on Mount Sinai left one dead and four injured on Tuesday. This was the latest attack in a series targeting Christian churches.

According to an Egyptian television broadcast, the terrorist hit took place at 8:00 pm. However, the report did not specify how the attack was made, while alleging that another police officer succumbed to his wounds. It took place at the entrance of the monastery area, about one kilometer away from the Justinian walls.

Later in the evening the Amaq news agency, which is controlled by the jihadists, reported that the attack was perpetrated by men of the Islamic State.

According to an Athens News Agency report, all Greek monks and pilgrims at the Hagia Aikaterini Holy Monastery are safe. The Greek Embassy in Cairo is in constant contact with Archbishop of Sinai, Pharan and Raitho, Damianos, the monks and the Egyptian police. Greek Deputy Foreign Minister Ioannis Amanatidis had a telephone conversation with the Archbishop.

The Greek Orthodox monastery of the God-trodden Mount Sinai is located at the point where God appeared to Moses in the Burning Bush, beneath the Mount of the Decalogue. The holy relics of Hagia Aikaterini (Saint Catherine) are enshrined there. It is the oldest continuously inhabited Christian monastery, with a history that can be traced back over seventeen centuries. The oldest record of monastic life at Sinai comes from the travel journal written in Latin by a woman named Egeria about 381-384. The monastery predates the divisions of the Christian world, its origins extending to late antiquity.