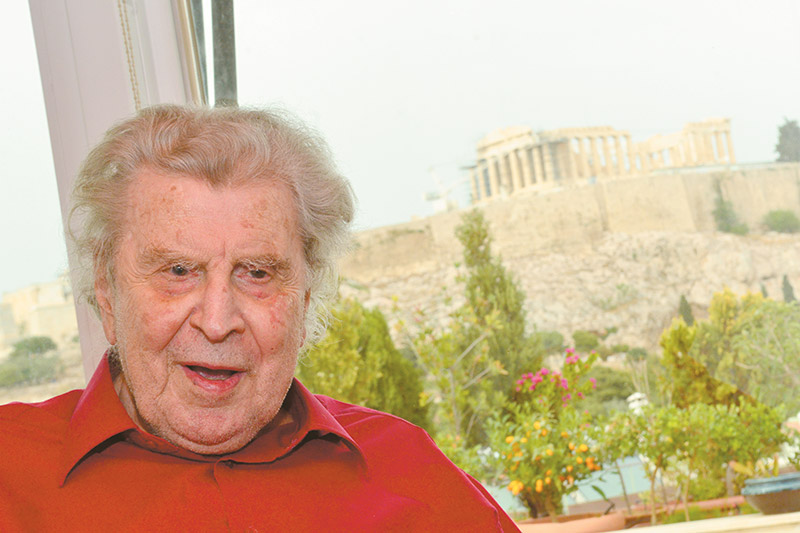 “During tough times, a Greek can become a hero or a slave,” said legendary Greek composer Mikis Theodorakis in an interview published in Proto Thema Sunday newspaper.
The 92-year-old musician, who is also an emblematic figure of the Greek Left, spoke about Greece’s current state, the leftist government, the main opposition party and the bailout agreements.
Theodorakis said that he is not shocked about the current condition Greece is in because, historically, the country has been through turmoil several times. He said the Greek spirit, like a light, shines through at the end because Greeks have an inner harmony that prevails.
However, Theodorakis said, this is a hard period for Greece and this time he is afraid for the future of the country: “When the Greek is with his back against the wall, he becomes a hero or a slave.
When asked to compare the current state of the nation with the times of the German Occupation, Theodorakis said that what Greece is going through now is worse: “I don’t remember people going through the trash to find food. I don’t remember elderly people waiting in line to get a cabbage.”
Theodorakis spoke in length about the time (2012) opposition leader Alexis Tsipras and leftist legend Manolis Glezos approached him and asked him to join SYRIZA and win the upcoming elections. He said he refused to join because the young candidate did not have a plan on how to get Greece going without supervision and financial aid from the European Union and the International Monetary Fund. He described Greece as a train rolling on tracks laid by the EU and the IMF.
“I told him ‘if you’re planning to come to power without having a plan to change the tracks and provide Greek people with what they need, then you are opportunists and you will only succeed in destroying the country and humiliating the Greek Left’,” the composer said about Tsipras.
“With great sadness, I believe that the current plight of the country confirms exactly what I said to Alexis Tsipras, here in my house, in the meeting that I mentioned earlier,” Theodorakis said.
The composer said that Greeks have a lust for power: “As soon as three Greeks get together, they start talking of who’s going to be the leader,” he said characteristically.
Theodorakis said that in Greek politics the mentality that even though PASOK gets single-digit percentages in elections now, the PASOK mentality prevails in Greek politics: “The PASOK mentality, however, is alive and well. It lives and reigns within SYRIZA. Tsipras is deeply PASOK… I fear that it lives and reigns within New Democracy as well.”
New Democracy leader Kyriakos Mitsotakis is a technocrat, Theodorakis explained, but the mentality of his party is PASOK. “I fear that he will have a hard time because of that,” the composer said.