GRNews
GreekReporter.comUSAMeet the Greek-American Making 'The Case for Vegan' (video)

Meet the Greek-American Making ‘The Case for Vegan’ (video) 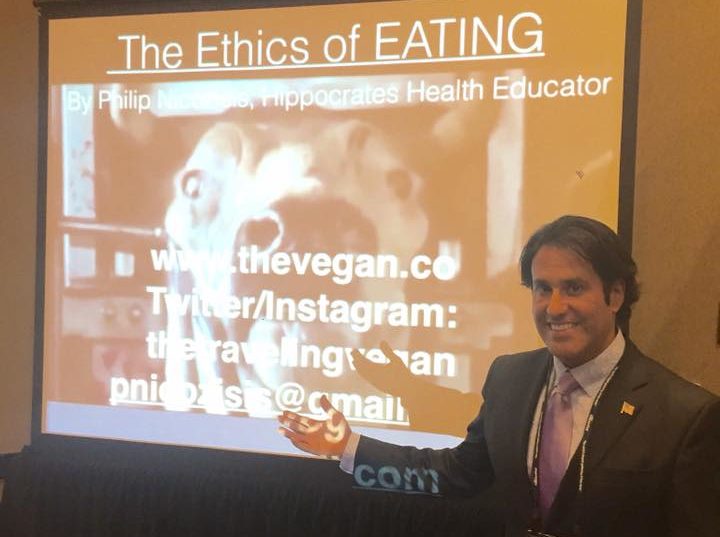 Many Americans are trying to eat healthier and change their lifestyle to lead them to better health. Greek-American Philip Nicozisis was one of them eight years ago when he decided to take matters into his own hands and find the course that would set him on the path to better health — a decision that would change his life and allow him the opportunity to inspire others to do the same.

Phillip found himself paying a visit to the Hippocrates Health Institute in West Palm Beach where he was able to fine tune a diet of veganism that helped him lose weight and improve his over all heath.

The Hippocrates Health Institute has programs which to help individuals understand why the option of going vegan may very well see an end to their chronic health issues such as the ones that Philip was facing when he first walked through the doors of the center, like being over weight, having insulin resistance, high cholesterol and much more.

However, it wasn’t so simple to just stop being a carnivore and hop on the vegan train, Philip told Greek Reporter. Initially he went to the Hippocrates Institute because he was interested in improving his health and saw that the program via Hippocrates did just that. It took him about 4 years of “drifting” before Philip made the full transition to vegan and accomplished a higher connection with what that means.

There are two main approaches by which people become vegans, he said. “There is the ‘side door’ which means you are doing it for yourself — for your health…the ‘front door’ means that you realize that all life is beautiful tapestry of interconnectedness — therefore animals’ lives should be respected.”

Now, Philip uses his story to help inspire and educate others by becoming a Hippocrates Health Institute Health Educator and has created thevegan.co where he “presents the case for vegan.” He is also a speaker on the subject of having a healthy, primarily raw diet and turning vegan.

Then he went on to point out that “what many people don’t realize is that being vegan is actually a ‘Hellenic idea’,” adding that “people don’t notice that the true diet of the Mediterranean Diet that was clinically studied was 90 to 99% plant-based.”

There are various levels of commitment that individuals are willing to take when starting a new diet or changing their lifestyle. The Hippocrates Institute offers a buffet open to the public six days a week for both lunch and dinner where people can be introduced to vegan meal choices and get an idea of how they can eat healthier just by purchasing different foods that are available at their local supermarkets.

Also Philip has written articles and has a regular speaking schedule talking about the benefits of going vegan and the Hippocrates Institute which you can read more about here and you can  watch the video below.