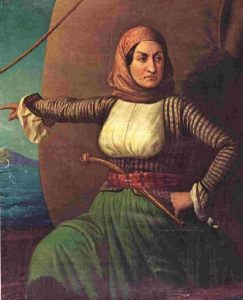 One of the most renowned heroines of the Greek Revolution, Bouboulina was a patriot to her last breath. She was born in May of 1771 in a prison in Constantinople and led a most untraditional life for her times.
Laskarina was married twice and inherited a fortune due to her marriages. There are reports that in 1819 Bouboulina joined the “Filiki Etaireia” (Society of Friends), which was an underground organization preparing to facilitate a revolution against Ottoman rule to liberate Greece.
Bouboulina went on to become a Greek naval commander in the Greek War of Independence when on March 13, 1821 she raised a Greek flag which was based on the flag of the Comnenus dynasty of Byzantine emperors on the mast of her ship, and led her fleet of eight ships to Nafplio where she started a naval blockade. 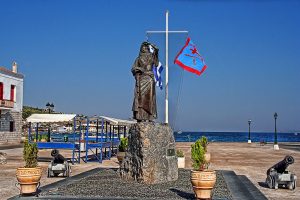 Her wealth and fortune came in handy as she spent most of her riches to supply ammunition and food for sailors and soldiers under her command. She would go on to participate in other naval blockages and the capture of Monemvasia and Pylos. In 1825, however, she was killed on the balcony of her house on Spetses during a family feud by an unknown assassin.
Manto Mavrogenous 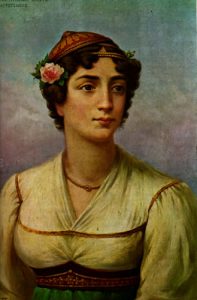 Born in 1796 in Trieste, Italy, which was at the time the Austrian Empire, Mavrogenous moved to Paros with her family in 1809 and joined the “Filiki Etaireia” in 1820 when she learned from her father, who was already a member of the organization, that they were preparing a revolution.
She was a wealthy and well-educated and convinced her wealthy friends to donate their money in efforts to increase the weaponry for the Greeks fighting the in the revolution reaching as far as Paris to appeal to wealthy women to side with the Greeks. 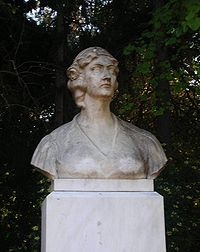 Mavrogenous first went to Mykonos to invite leaders to join in the revolution. Soon after she left her family in 1823 to move to Nafplio to fight at the center of the conflict. She stayed in Nafplion after the war concluded and she was granted the rank of Lieutenant General by Kapodistrias. After Kapodistrias’ assassination Mavrogenous returned to Mykonos and lost her life to typhoid fever in July of 1848.
Rallou Karatza
Born a princess in 1799, Karatza became an actress, theater director and translator. She was participant in the Greek War of Independence as it is rumored that she too became a member of the “Filiki Etaireia” and she used her influence as a stage actress to help the revolution. Karatza translated and performed plays from Western Europe in the “Cişmeaua Roşie” in Bucharest, where she became a valuable weapon of propaganda for the revolution. Reports say that she died in 1870.
The “Mesolongitisses”
The women of Missolonghi, or “Mesolongitisses” are remembered as the brave women who helped in the efforts to liberate Greece from the Turks in many ways. They not only defended western Greece throughout the long siege of the area, they also helped the soldiers by transporting materials to build forts such as wood and tools and helped those wounded to recover. During the exodus many of the women of Missolonghi perished alongside the soldiers as they were massacred, captured or committed suicide to escape further torture at the hands of their enemy.
The “Souliotisses”
Also, the women of Souli called “Souliotisses” are known for their bravery in fighting as well as for being martyrs. They took part in the military operations of northern Greece and even threw boulders off of high cliffs that would smash into the Turks below during battles. In December of 1803, at the “Dance of Zalogo” these women opted to thrown themselves off the high cliffs where they once threw rocks from in order to commit suicide rather than be captured by the Turks.