Movies About the 1821 Greek War of Independence 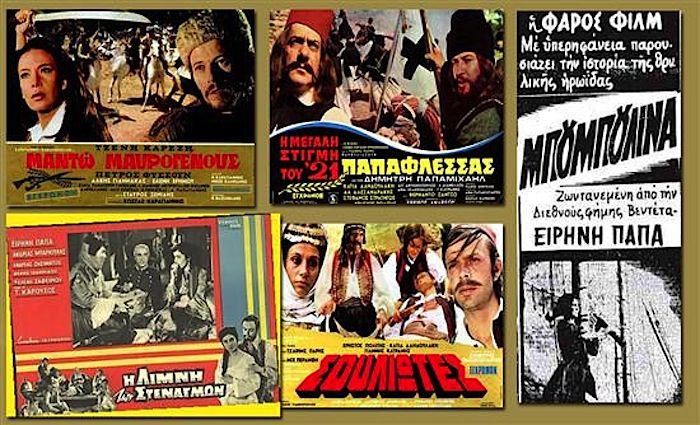 On the 25th of March 1821 when Germanos III of Old Patras gave the speech about “Eleftheria I Thanatos” (Freedom or Death), the Greek Revolution against the Turkish occupation that held the country captive for 400 years began. The uprising started from the south of Greece, where most of the heroes of the Greek Revolution used to reside.
The liberation of Greeks, which was one of the most important moments in the country’s history, has been commemorated many times in cinema. There are many movies that shed light on the Greek struggle to freedom. These “classics” are a good way for young people to learn their country’s history and remember the efforts and struggles of their forefathers.
Firstly, one of the greatest Greek movies about the 1821 Revolution was “Bouboulina,” which was filmed in 1959 and was directed by Kostas Andritsos, starring Irene Papas and Andreas Barkoulis. It is a historical biographical drama about the female naval commander, Laskarina Bouboulina, a heroine of the Greek Revolution that gathered her troops and started the uprising on the island of Spetses. She also donated most of her possessions and money to the Greek war for independence and she herself fought against the enemy. This movie is very accurate and depicts the historical facts exactly as they happened.
Another noteworthy movie is “I Exodos tou Mesolongiou,” (The Exit from Missolonghi) from 1965, directed by Dimitris Doukas, in which starred many great actors of that era,  such as Manos Katrakis, Tzavalas Karousos and Anna Iasonidou. In April 1826, the Greeks started an uprising against the Turks, the heroic exit from the “sacred city of Missolonghi.” The movie depicts the heroism and sacrifice of the Greeks in order to free their homeland from the enemy.
Next on our list is the famous movie “Manto Mavrogenous” directed by Kostas Karagiannis in 1971. Jenny Karezi, one of the most well-known Greek actresses took on the role of Manto Mavrogenous and Petros Fyssoun played the role of Demetrios Ypsilantis, another great figure of the Greek Revolution. Manto Mavrogenous — a few years after the uprising in which she was actively involved — requests to receive a soldier’s pension and reminisces about her past, her love for Prince Demetrios Ypsilantis and schemes of her enemies. This was the first attempt to make a Greek epic war movie about the 1821 Revolution, with great performances and historical accuracy.
Last but not least, the movie “I megali stigmi tou ’21: Papaflessas” (A Great 1821 moment: Papaflessas), is one of the most important Greek war movie productions, directed by Erricos Andreou and starring Dimitris Papamichael and Alekos Alexandrakis. The movie depicts the life and work of 1821 Greek hero, Gregorios Flessas, or Papaflessas. He was a cleric who during the liberation struggle of the Greeks against the Turks, organized the troops and declared war against the enemy.