Greek Tourism Revenue Might Help the Country Turn a Corner, But Still a Bumpy Road Ahead 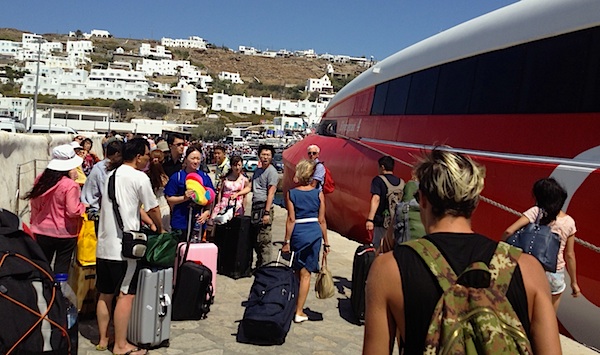 Tourism in Greece is on the rise and the revenue from the tourism sector is crucial for putting the Greek economy in the green. However, even with the 9 percent increase in tourism this year, there are still factors such as an uncertain future in the EU and political and economic instability with neighboring Turkey that might present obstacles for Greece’s economic recovery.
The head of the Association of Greek Tourism Enterprises (SETE), Andreas Andreadis told Reuters that the tourist sector is expected to flourish in 2017, aiming at a 2.7 percent growth with revenues reaching up to 14.5 billion euro — something vital for the recovery of the Greek economy which relies on tourism for around 18 percent of its GDP and is responsible for creating one out of every five jobs.
However, there is one obstacle in the way of reaching this potential growth rate in 2017 — instability. The political instability in the country, revolving around the escalating tensions and war of words between Turkey and Greece could discourage tourists from booking their vacation in Greece this summer. Andreadis explained to Reuters what is at stake because of the rising tensions, saying “We could see a rebound to 14.2-14.5 billion euros, which translates to a 9 percent increase year-on-year,” adding, “But these estimates come with conditions.”
There is the economic crisis, which revolves around the uncertain future of Greece staying in the EU as well as the bailout reviews. These are factors which could potentially have a negative impact on the tourism sector, as Andreadis explained to Reuters that the meeting was, “a first step but we don’t have a deal yet,” adding “This is a significant risk, which could affect demand and arrivals, if there is no happy end.”