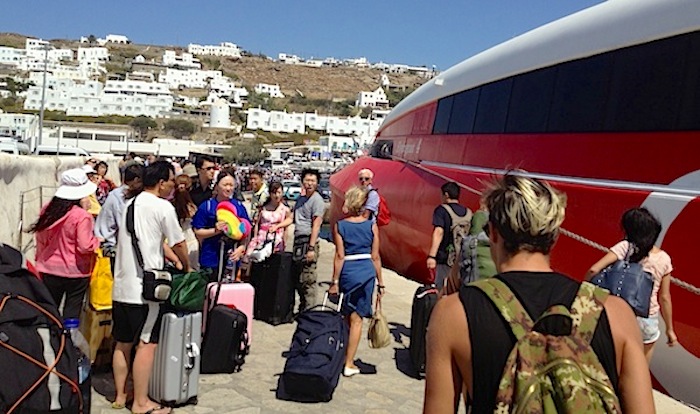 Despite the ongoing migrant and refugee crisis, Greece expects to welcome a record 27 million tourists this year.
“I think it’s an achievement given the fact that we have capital controls, we still have the refugee and migration crisis — which make tourists think twice if they want to visit Lesbos or some other places that are migration hubs,” the government’s top spokesperson Lefteris Kretsos told reporters.
“Greece is a brand name in tourism. It always was, and I think it will always be,” he added.
In part, Greece could be seeing higher tourist numbers because of the political instability and terrorist attacks that have scared off international travelers from nearby Egypt and Turkey.
Both of those nations have catered to millions of tourists in the past, but now have seen their numbers drop dramatically.
Greece has suffered a prolonged economic crisis, but otherwise has remained safe and stable. Last year the country received some 26.5 million international visitors.
“The biggest tourist agencies are confident about Greece,” said an upbeat Kretsos, who touted Greece’s many attractive qualities for tourists, including good weather, great food and ancient monuments. He also stated that Greece’s international image is the way the country has handled the more than 1 million refugees and migrants who have arrived since 2015.
“The fact that ordinary people have treated migrants with a lot of support is also something that I think attracts more people to visit Greece; it’s not an obstacle at the end of the day,” said Kretsos.
Tourism is a key contributor to the Greek economy. According to the Association of Greek Tourism Enterprises (SETE), it comprises more than 20 percent of the country’s GDP and accounts for one out of every five jobs.
(source: VOA)