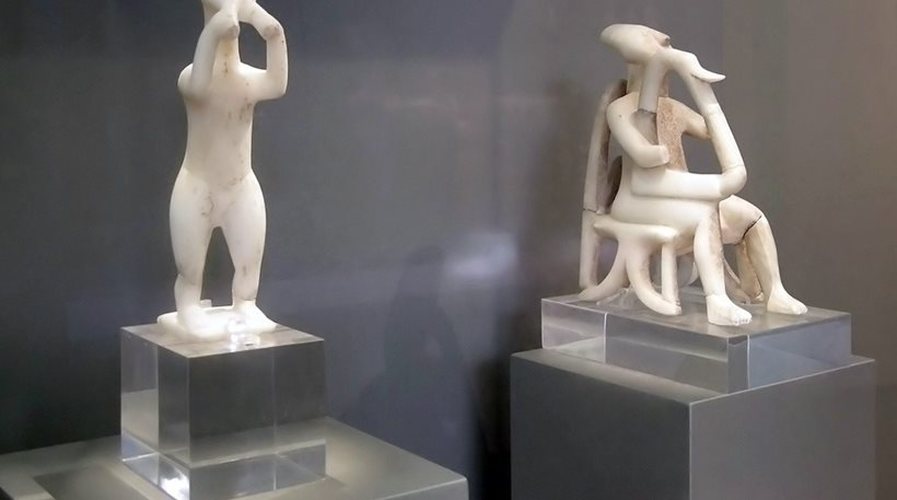 The oldest island sanctuary in the world is on the island of Keros, between Naxos and Santorini, according to British archaeologist Sir Colin Renfrew, who has spent a decade investigating in the area.
The sanctuary found dates to about 3000 BC, in the Bronze Age, archaeologists say. A new finding is a staircase that connects the Kavos mount with the Dhaskalio islet, before the strip of land that connects the two spots sank in the water.
On Kavos, archaeologists found hundreds of broken pieces of marble Cycladic figurines, marble basins and unusual pottery for drinking wine, all used as ritual offerings. However, none of the marble pieces can be stuck together with another to reform a whole object, suggesting that the pieces came to Kavos already broken.
“It appears that there was a kind of obligation to bring a piece of the broken figurine and deposit it on the sacred island of Keros, possibly by staying a few days in Dhaskalio during the completion of the ceremony,” Professor Renfrew had told The Times in 2011.
The style of the pottery indicates that the ritual offerings were mainly between 2750 and 2550 BC, with a gradual decrease in the next half century. The recently discovered staircase also indicates ritual activity.
In 2008, remains of a sanctuary building have been identified, dating between 2550 and 2400 BC. There are also indications that the sanctuary was abandoned around 2000 BC. According to Professor Renfrew, it is “the largest known building of the Cycladic period” and the region “has the most spectacular public architecture in the Cyclades of that era, unparalleled anywhere in the Aegean region.”
“The importance of the Keros sanctuary as the first important religious center in the Aegean Bronze Age is reinforced by new findings in the structure on Dhaskalio,” according to Professor Renfrew. “The main ritual offerings of broken marble figurines and vases and ceramic drinking vessels were on the mount Kavos on Keros, without being accompanied by impressive structures or a large building complex,” he said.
“Instead,” he added, ” these monumental buildings were built on the settlement of Dhaskalio. The design and monumental characteristics are now beginning to be understood. It was clearly the most important ceremonial center of the Cyclades in central Aegean since the beginning of the 3rd millennium BC. Undoubtedly some 500 years earlier than any other ceremonial center in the prehistoric Aegean,” the British professor said.