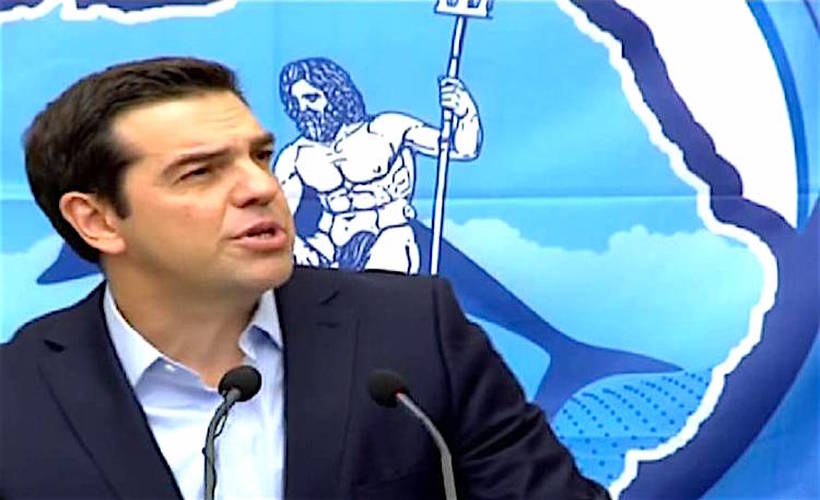 “We will not listen to foolish technocrats… Who say that what is wrong is right,” Prime Minister Alexis Tsipras said, referring to recent statements made by the International Monetary Fund.
The Greek prime minister criticized the IMF while addressing the people of Nisyros, a remote eastern Aegean island that is part of the Dodecanese, located between Kos and Tilos. This was the first time ever that a Greek prime minister visited the island.
Tsipras pledged that his government will support the islands and announced a series of measures designed to support island populations throughout Greece. He was accompanied by Defense Minister Panos Kammenos, Shipping and Island Policy Minister Panagiotis Kouroumblis, Deputy Shipping and Island Policy Minister Nektarios Santorinios and SYRIZA MPs from the Dodecanese and Cyclades islands.
The prime minister said that the islands are in the front line of the refugee crisis and have to carry the burden of all Europe. Therefore, a minimum compensation to the islanders shouldering this burden was a moral obligation, he said, and the VAT reduction on Aegean islands is one of the measures. He also announced the immediate activation of the Council of Island Policy and said the government’s aim is to create opportunities for growth on Greek islands.
Furthermore, Tsipras said that the government’s priority is to provide islanders with better health services, especially for the elderly, by building hospitals and health centers, hiring additional staff and ensuring that there will not be an island without a doctor.
Tsipras also found the opportunity to lash at the IMF for asking for additional fiscal measures. He repeated that the Greek government is not going to implement more austerity to the already suffering Greek people. He said that past IMF policies regarding Greece’s bailout have been proven wrong.