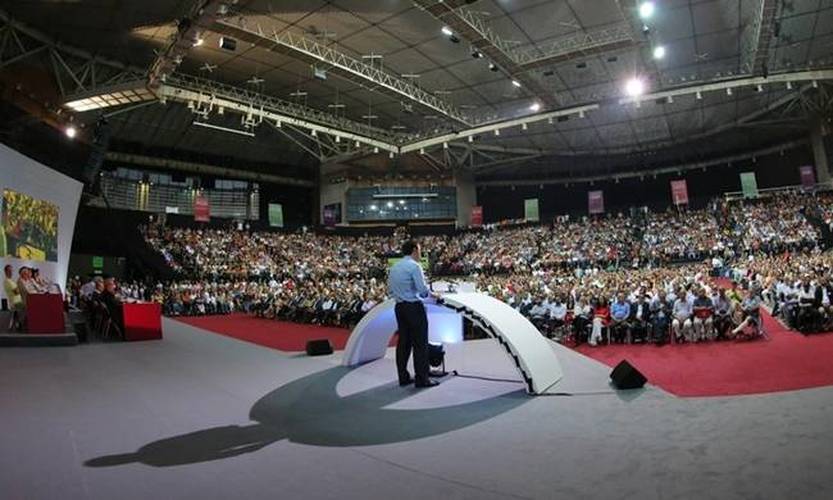 The results of the vote for electing the new Central Committee in the second SYRIZA Conference on Sunday night show that the leftist candidates won over the more conservative ones.
The vote makes it apparent that most delegates continue to live their leftist, infeasible fantasies. Or illusions, as Alexis Tsipras has called his deceitful pledges to the Greek people. Illusions such as a generous welfare state while the country is in debt and state coffers are empty. Or that the European Union will continue to give Greece loans without asking for repayment.
First, it was the Tsipras win who was elected party leader with an impressive 93.54% of the vote. This Nicolae Ceaușescu percentage is an indication that SYRIZA is a person-centered party with no clear political agenda, despite Tsipras’ empty declarations and manifestos. If any of his leftist manifestos were true, he would have never allied with an extreme rightist like Panos Kammenos and the Independent Greeks in order to govern. Kammenos, by the way, matched his coalition partner’s shameless opportunism by addressing the delegates as “comrades” when he spoke in the conference. No wonder the irony made them all laugh.
The faction of the “53” hardcore leftists of the party had a grand show of strength as their leader, Finance Minister Euclid Tsakalotos, received the most votes in the ballot for the party’s new Central Committee. Other than signing painful taxes, Tsakalotos often reminds Greek people in his statements that he is a communist.
So does Education Minister Nikos Filis who came a very close second in the ballot. His proclivity to clash with the Church on religion classes in schools made him popular with the SYRIZA leftists who want a clear separation between Church and State. His confrontational nature also fared well with voters who believe that life should be a constant struggle against things that don’t belong in leftist ideology.
House Speaker Nikos Voutsis, Health Minister Andres Xanthos and Government Vice-President Yiannis Dragasakis who emerged third, fourth and fifth respectively belong to the party moderates who never offend with their behavior or statements.
Energy Minister Panos Skourletis who came sixth in the vote has often insulted people’s intelligence by always making statements against privatizations and then goes ahead and signs them. After he signs them, he claims that they are not privatizations per se but deals for the good of the people.
Deputy Health Minister Pavlos Polakis who received seventh place in the vote is the party bully. He is the foul-mouthed thug who verbally attacks whoever he thinks is against the government. Which is roughly 85 percent of Greek people, according to opinion polls. While the Greek health system is collapsing, the deputy is all-day long on Facebook swearing at the enemies of the state. SYRIZA members awarded his excellent behavior.
State Minister Nikos Pappas came eighth and he remains a mystery. The Josef Goebels wannabe who arbitrarily assumed the role of mass media controller, disregarding the constitutional role of the National Council for Radio and Television, staged the farce called television licensing tender and on Friday night, tried slyly to pass a bill that would shut down the existing television stations that did not receive a license in the auction. His methods have made him unpopular in the eyes of the public. However, the delegates seem to approve them.
Rena Dourou who follows in the ballot count has been keeping a low profile throughout her stint as Attica Governor. Current Secretary of the Central Committee Panagiotos Rigas who came tenth is also a low-key politician.
While most SYRIZA delegates wish for the party to maintain its leftist roots, reality is not exactly on their side. The bailout program does not allow room for illusions. But more importantly, Tsipras is not on their side. The Greek prime minister has become cynical and what he cares for now is how to stay in power as long as possible, as more and more Greeks express their discontent in polls. He tries to bring the Centrists Union closer, he flirts with former PASOK ministers, he even tries to ally with European socialists.
What the SYRIZA members forgot to take into account during their celebratory fair was Greek people. While they were arguing over who is more leftist than the other, laughing with inside jokes and smiling next to Tsipras, the vast majority of Greeks were struggling to collect the money to pay the exorbitant taxes imposed on them, knowing that part of their money goes to sinecures of SYRIZA members. And no fresh lies or loud manifestos are enough to make “the people” forget their financial woes.