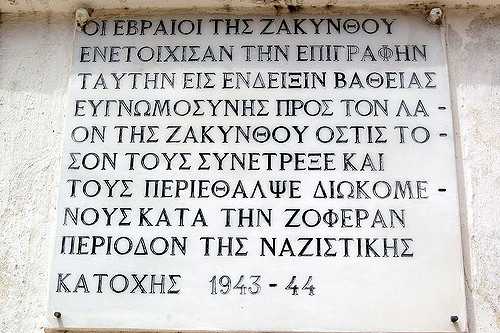 Eleni Kriezi-Apostoli (Lena Karrer), the daughter of the legendary late Mayor of Zakynthos, Loukas Karrer, known for saving the Greek island’s Jews during the Holocaust, will visit Israel on September 18-21. The visit is being organized by the Israeli Ministry of Foreign Affairs.
On September 9, 1943, during the Nazi occupation of Greece, the German commander on Zakynthos named Berenz asked the Mayor, Loukas Karrer, for a list of all the Jews on the island.  Joined by the Greek Bishop at the time, Mr. Chrystostomos, Karrer flatly rejected the request. In a great display of courage and defiance, the mayor and bishop handed a piece of paper to the Nazi commander with only their names on it. Following this, Karrer and the other island’s leaders rushed to hide Jews in Christian homes in the mountains, as a result, all of the 275 Jews of Zakynthos were saved while Jewish communities in other parts of Greece perished.
Loukas Karrer has been awarded with Yad Vashem’s title of “Righteous among the Nations” along with another 327 brave Greeks for their courage and self-sacrifice in rescuing their persecuted Jewish compatriots.
During her visit, Lena Karrer will be received by the President of Israel, Reuven Rivlin, the Patriarch of Jerusalem, Theophilos, high-ranking Israeli Foreign Ministry officials dealing with public diplomacy, World Jewry, interreligious affairs, anti-Semitism and Holocaust remembrance as well as the Greek Ambassador, Konstantinos Bikas.
Karrer will also meet with members of the Organization of Holocaust Survivors from Greece and visit the Yad Vashem Holocaust Remembrance Museum and Institute as well as schools, where she will talk to students. She will also give interviews to the Israeli TV media.