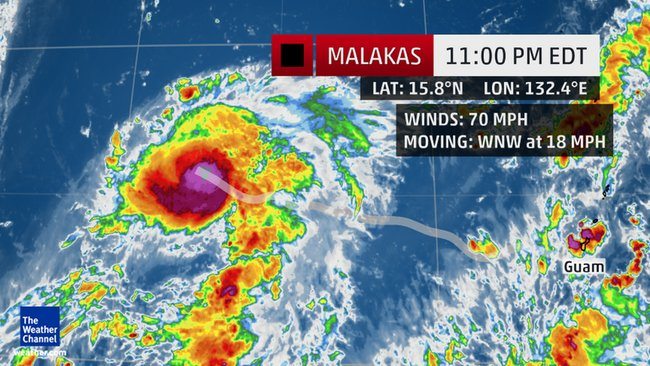 As of early Wednesday, Tropical Storm Malakas was centered 650 miles east of Manila, Philippines, and was moving gradually west-northwestward towards Japan. Named “Malakas” meaning storm in Tagalog, whereas the same word means “wanker.” Social media caught fire with innuendos and references to #Malaka.
There were social media users who pointed out that Greek has more than one Malaka to deal with. “Who in their right mind names a typhoon #Malakas? Kids across Greece are pissing themselves,” Tweeted one user. “What brought you here? #Malakas,” tweeted another. Greeks pointed out that they have the storm #malakas every day.
In Greece’s twittersphere #Malakas became a top trend. Some Twitter uses associated the meaning of “Malakas” as strength with the power of a Greek “malakas.” Another user said that typhoons usually have female names so they gave men a common name – “malakas.”  Users wondered what Japanese tourists must feel when they hear people using the term “malakas” to describe each other all the time.
Greek Australian comedian Nick Giannopoulos took to Facebook, he wrote: “BREAKING NEWS: TROPICAL STORM MALAKAS is coming! This could become a typhoon & turn into an even bigger MALAKA!! Don’t make jokes about this (especially if your Greek) Western Pacific countries are treating this ‘malaka’ very seriously.”