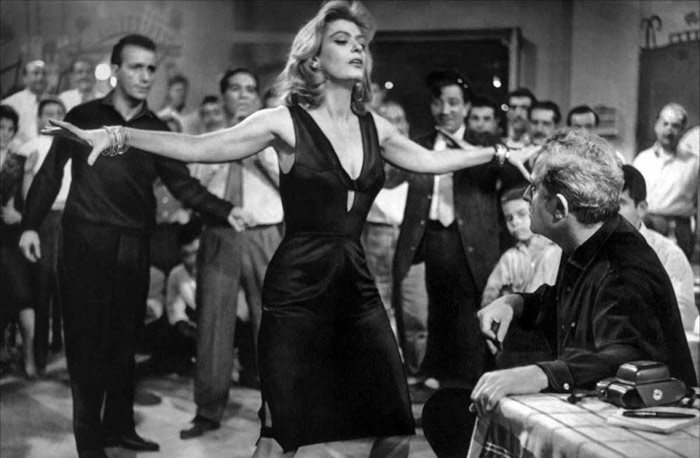 Christina Newland submitted her listing of 10 great Greek films on the British Film Institute’s (BFI) site. She points to the Greek movie industry’s struggle after its golden age in the Fifties and Sixties despite wartime chaos and dictatorial regimes. It floundered as it lay unsupported by state funds and strict controls. She points to the difficulties of filmmakers to find success among English-speaking audience, though in recent years a “handful of “avant-garde, low-budget filmmakers have broken out on the European festival circuit.” She stirs names such as Yorgos Lanthimos, and a new uncontainable anarchy loosely classified as the “Weird wave” that have contradicted the prevailing cinematic tradition that tends to look inwards.
The best 10 films are outlined on the BFI’s site as the following:
Stella (1955)
Director Michael Cacoyannis


Director Michael Cacoyannis, creator of “Zorba the Greek,” is one of Greece’s most well-known filmmakers. He studied theater in Britain before returning to Greece in 1953. “Stella,” with Melina Mercouri in the title role, tells the story of a woman in love with a football player but opposed to the idea of marriage. Forced to marriage, she does not appear in church and is killed by her jilted lover with a dagger at the end of the film.
O Drakos (1956)
Director Nikos Koundouros

Nikos Koundouros’ movie “O Drakos” (The Fiend of Athens) is a Greek film noir about a notorious gangster. Thomas, the unfortunate protagonist played by Dinos Ilioupolos is the gangster’s lookalike in an unfortunate case of mistaken identity.
Never on Sunday (1960)
Director Jules Dassin

Director Jules Dassin, made this vehicle for his wife, Melina Mercouri, who stars opposite him as a strong-willed prostitute who he tries to bring under his thumb. The film is a parable about American attempts to “improve” others. Mercouri shines through in her performance that embodies the fighting spirit of a generation of young Greeks.
The Traveling Players (1975)
Director Theo Angelopoulos
https://www.youtube.com/watch?v=6wPRESKtDJo
A traveling troupe of actors capture Greek history beginning with the German occupation in 1939 all the way to war-torn mid-century Greece. The 4-hour film is a tapestry of political factions that have defined Greeks from pro and anti-royalist groups, partisans, occupied forces and others. The film shot the young director to stardom.
Rembetiko (1983)
Director Costa Ferris
https://www.youtube.com/watch?v=lheWvihvtto
Ferris’s film, named after a genre of traditional Greek music, is a loose account of the life of popular Greek singer Marika Ninou. The protagonist is forced to come up against with the collapse of Greek social order and uses rembetiko music as “a source of pride amid the chaos.”
Voyage to Cythera (1984)
Director Theo Angelopoulos

The first of the Angelopoulos “Trilogy of Silence” (followed by “The Beekeeper” and “Landscape in the Mist”), tells of the homecoming of an elderly man exiled for 35 years after the Greek civil war for his left-wing politics. He finds his family after he .returns but finds little depth of feeling for them. An enigmatic film that raises more questions than it gives answers.
Dogtooth (2009)
Director Yorgos Lanthimos
https://www.youtube.com/watch?v=QFtDzK64-pk
A stunning example of a new wave of weird cinema that is “ominous, provocative and surreal.” A cult-like, walled-in family environment holds two sisters and their brother captive and isolated from the outside room. Queasy moments.
Plato’s Academy (2009)
Director Filippos Tsitos

The movie looks at the conflicts of nationalism vs. multiculturalism at the region of Plato’s Academy where a bunch of big-mouthed people sit outside a cafe all day and bicker, discuss events and complain about the Albanian immigrants in their area until they discover that one of them has Albanian blood.
Attenberg (2012)
Director Athina Rachel Tsangari

A drama of sexual confusion and female friendship filtered through the misfit eyes of Marina, an isolated young woman who spends her days indoors obsessed by David Attenborough’s nature documentaries. Marina is the daughter of chronically ill architect Spyros, and they live together in a spacious home in industrialist Greece.
OXI: An Act of Resistance (2014)
Director Ken McMullen

OXI (meaning NO) is an insightful, philosophical response to the Greek economic crisis, placing it in a historical and cultural context wider than any traditional historian or economist might. The film is named for the Greek word “no” – something symbolically important to anyone of Greek heritage. “Oxi Day” is a national holiday of great importance in Greece, marking the date in 1940 when the Greek republic stood up against invading Italian forces.