Plan B Causes Uproar: Did Tsipras-Varoufakis Work With Galbraith for Grexit? 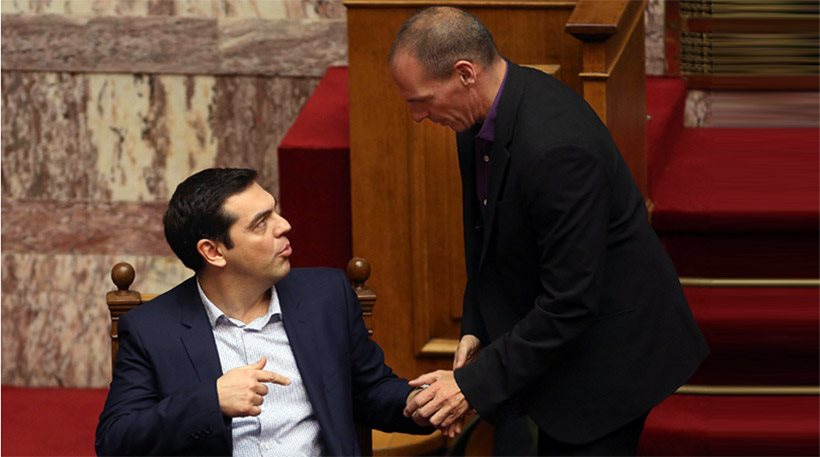 A political storm was fueled a year after the Greek referendum with the release of American economist James Galbraith’s book about Plan B for Greece drafted by former finance minister Yanis Varoufakis. The book, titled “Welcome to the Poison Chalice: The Destruction of Greece and the Future of Europe,” coincided with the Greek Parliament’s approval of the conservative New Democracy party’s recommendation for a House investigative committee into last year’s negotiations with creditors.
Galbraith writes that Varoufakis asked him in March 2014 on the delicate task of Plan B as preparation of a preliminary plan – a contingency plan to be activated if Greece were pushed out of the Eurozone.
The revelations caused an uproar. Opposition New Democracy Spokesman Giorgos Koumoutsakis called for the “dark period to be fully illuminated.” He said that the future of the country had been gambled on.
Popular Unity leader Panagiotis Lafazanis, who split from the party following the agreement for a new bailout, said that Prime Minister Alexis Tsipras and Varoufakis had never had the Grexit as an option. He said that talk of such a prospect is to stir fear following the Brexit.
Greece’s negotiator George Chouliarakis attacked Galbraith for his statements concerning Plan B for Greece’s return to a new drachma and the nationalization of the Bank of Greece. He said that the statements in the book were fabrications. “Mr. Galbraith had no institutional role (in negotiations) nor was he present at any meeting from April until August 2015 when I was chief of negotiations,” said Chouliarakis.
Socialist PASOK leader Fofi Gennimata called for a judicial inquiry into the recent revelations of secret designs between Tsipras and Varoufakis.