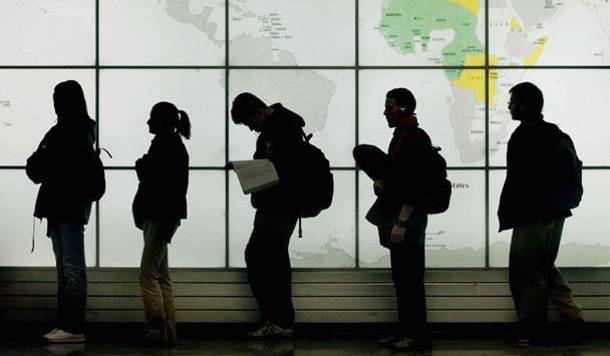 Over 427,000 people left Greece since the onset of the economic crisis in 2008, marking the third wave of mass emigration in the 20th and 21st centuries.
The figures come from a recently released Bank of Greece report entitled “Fleeing of Human Capital: Contemporary migration tendencies of the Greeks in the years of crisis”.
Historically and traditionally, Greece is among the countries with high emigration experience. Since the beginning of the 1900s, 1,764,000 Greeks left the country seeking a better life abroad.
“Migration and poverty are undoubtedly the two most painful consequences experienced by a society in protracted crisis conditions,” said Kathimerini newspaper Sophia Lazaretou, economist and author of the report.
The number of Greeks aged 15-64 who left the country since 2008 is 427,000. In 2013 alone, 100,000 people migrated, tripling the yearly average until then. The phenomenon continued with unabated intensity in 2014 and further exacerbated in the first half of 2015.
The Greek emigration wave for work abroad is still in progress and does not appear to be slowing down as unemployment remains at 25%. This is the third wave of mass emigration of Greeks.
The first period of mass emigration of Greeks was 1903 to 1917. The second from 1960 to 1972 and the third from 2010 until the present, and still continuing. All emigration waves were due to economic reasons. There was also a minor wave of emigration in the years 1969 to 1971 but that was purely for political reasons since there was a dictatorship in Greece at the time.
“It is no coincidence that all three phases took place after an intense recessionary disorder that widened the gap between our country and developed countries and fueled the exodus of people, young people being the majority, seeking new opportunities and growth potential,” Lazaretou said.
During the first emigration wave, the main destinations were “transoceanic countries” (U.S.A., Australia, Canada, Brazil and South East Africa). Seven out of ten of migrants were aged 15-44 years, less than two in 10 were women and the overwhelming majority were unskilled workers and farmers, with low education, who worked in the host countries usually as servants and laborers.
The second migration wave mainly involved young people aged 20-34 years (7 to 10), 5 to 10 stating manual labor as their profession, while 4 in 10 were unemployed. Six out of 10 went to Germany and Belgium and were employed as factory workers.
However the third mass exodus of Greeks involves mostly young, educated people with professional experience, directed mainly to Germany, the United Kingdom and the United Arab Emirates.


Greece ranks fourth in the European Union in migration outflow and the proportion of the workforce in the country. Cyprus is first, followed by Ireland and Lithuania. It ranks third after Cyprus and Spain in the percentage of young emigrants. Specifically, the outgoing Greeks, only in 2013, represented more than 2% of the total workforce of the country, while the proportion of people aged 25-39 years was over 50% of all emigrants.
Proposals to stop the fleeing of human capital
The Bank of Greece report offers six recommendations to halt the phenomenon of emigration.
First, it suggests a shift to more productive sectors of the economy and linking education with production. Higher education should be linked with productive specialization.
Secondly, it calls for neophyte entrepreneurship support actions such as creating new meeting spaces. The majority of educated youth (61%) who participated in the survey of Endeavour Greece 2014 wishes to work in the private sector, and 52% to have their own business.
Third, it calls for an emphasis on the values of excellence, transparency and meritocracy. It proposes periodic competitions with the support of professional bodies and the state, offering generous premiums, such as prizes and subsidies to companies for the hiring of young Greek scientists.
Fourth, emphasis should be given to the need for widespread adoption of the institution of apprenticeships and traineeships.
Fifth, it urges for the creation of an environment friendly to entrepreneurship. Based on assessments of competitiveness indicators of the World Economic Forum for 2015 and 2016, Greece is one of the largest providers of scientists and engineers in digital technology. Reducing bureaucracy, creating a friendly attitude of the state towards businesses, reduction of social security contributions and tax cuts until the startups become profitable are crucial elements that can create an entrepreneurship-friendly institutional framework.
Sixth, it is considered necessary to reintegrate in society young people not in education, employment, or training (NEET). In Greece, the proportion of NEETs aged 15-24 is more than 19%, the third highest in the EU. Young people in this category often find themselves abandoned by the state and placed in the margins of social and economic life.