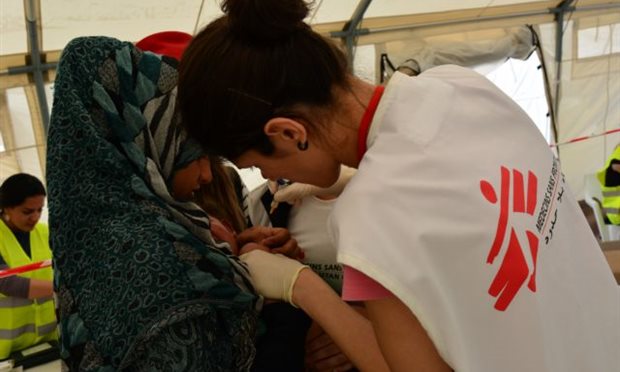 As refugee children have been caught in the middle of war-torn events over the last several years, one vital health concern has developed.
Children have not had access to inoculations for some time now, and Doctors Without Borders and the Ministry of Health in Greece are taking action to give refugee children basic healthcare.
In order to protect them against childhood diseases, thousands of children at Elliniko Camp in Athens between the ages of 6 months and 15-years-old will undergo receiving three shots for diphtheria, tetanus, whooping-cough, measles, mumps, rubella, Haemophilus influenza, hepatitis B, polio, and pneumococcus.
Doctors Without borders has the support of the Greek Ministry of Health to help provide any further access to the Greek healthcare system.
This past May Doctors Without Borders inoculated more than 3,000 refugee children at the Idomeni Camp and surrounding areas.
Just last week, they also made the rounds to a refugee camp in Eleonas and inoculated the children present at that camp.
Teams of Doctors Without Borders are set to visit camps at Samos, Lesvos, Thermopylae, Katsikas, Tsepelovo, Doliana and Knits over the next few weeks to carry out inoculations.

The Amazons Could Have Existed in Ancient Greece