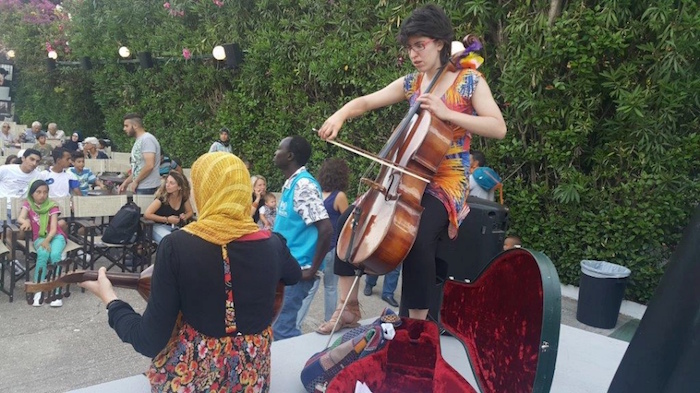 Art and photo exhibitions, a chess tournament and a film festival were among events held this week on the Greek islands of Leros, Lesvos and Kos and in Athens to mark World Refugee Day, Monday June 20.
The main event in the Greek capital was an Olive Wreath Run on Wednesday from the Acropolis Museum to the courtyard of the Zappeion exhibition hall, near the Panathenaic Stadium where the first modern Olympics were held in 1896.
Greek and refugee children took part with Olympic champions and athletes who had taken part in previous Olympic Games. On Leros, one of the islands in the front line of Greece’s refugee emergency, the festivities began on Monday with an exhibition of drawings done by refugee children on the themes of “hope” and “dreams”. The next day, refugees, residents and UNHCR staff took part in a three-hour chess tournament.
On Wednesday, a “human library” was organized at the premises of the Leros Trade Association, in which the “books” were real refugees and borrowing one involved holding a conversation and hearing their stories and experiences.
A screening was held in Platanos, the main town on Leros, on Thursday of the award-winning documentary The Longest Run by Marianna Economou, which tells the story of two underage refugees from Syria accused of people smuggling and imprisoned in Greece.
At Mytilene Castle on the island of Lesvos, a tree was nominated as the “Solidarity Tree” and visitors were invited to pin messages of hope and remembrance to it, written on fragments of a discarded rubber dinghy once used to carry refugees across the Aegean from Turkey.
Also at the castle, artists from various European countries collaborated to perform a drama project called “Meeting the Odyssey” on World Refugee Day. The project, supported by UNHCR, combined elements of the Odyssey, contemporary themes relevant to Europe and stories collected through exchanges with the local population.
On Kos, events included a six-day film festival at which eight award-winning films and short documentaries, mostly with a refugee theme were shown. A photo exhibition entitled “Refugees in Time” was organized by the Historical Archive of Greek Refugees, the Kos municipality and the International Hippocratic Foundation of Kos.
Among those invited to the events on Kos was Dionysis Arvanitakis, who became known as “the baker of Kos” when he began handing out free bread and pastries to refugees from the back of his bakery van on the island.
(source: UNHCR)